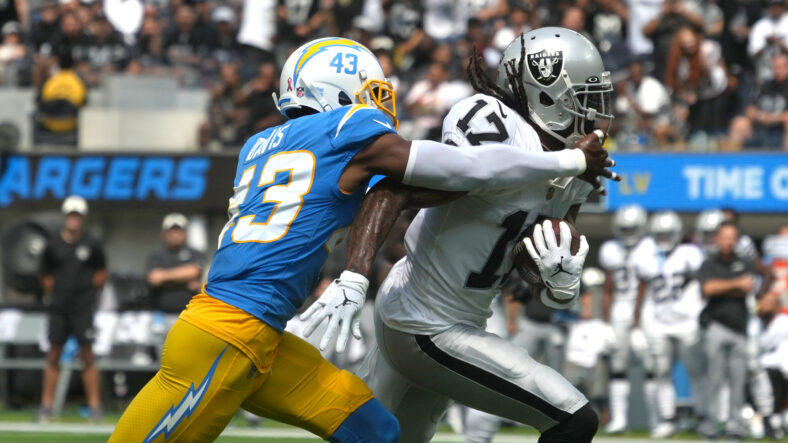 In the last couple of seasons, the Vikings’ defensive backs have been the Achilles heel of the franchise. After the departures of Xavier Rhodes and Trae Waynes, the organization relied on cheap free agents and young and inexperienced players.

General Manager Kwesi Adofo-Mensah re-signed Patrick Peterson to play one outside cornerback spot and drafted Andrew Booth in the second round. However, Booth lost the camp battle to Cameron Dantzler, who’s currently in his third NFL season. Dantzler is slowly becoming a reliable cornerback and made some winning plays in recent games.

The slot cornerback spot is still causing headaches. After Mackensie Alexander’s atrocious 2021 campaign, the team filled the spot with Chandon Sullivan, a veteran from the Packers. He played nickel cornerback in Green Bay for years and does the same in Minnesota. While he’s an improvement over Alexander, he’s not playing great football. PFF gave him a grade of 55.7 throughout the first five games, which ranks him 69th of 104 eligible cornerbacks. Noteworthy is that his run defense grade is elite. His coverage, meanwhile, is alarming.

ESPN came up with a solution, and their analyst Bill Barnwell presented a trade idea. He titled the part of his article with ‘a Cornerback upgrade in Minnesota’, and the deal would send Kris Boyd and a sixth-round pick to the Los Angeles Chargers for their cornerback Michael Davis.

Davis is in his sixth career season, and he played all of them for the Chargers. The 27-year-old appeared in 78 games and started 51. Davis also played about 90% of the defensive snaps in the last three seasons. So why would he be available? Barnwell answered that question.

Signed to a three-year, $25.2 million extension before the 2021 season, Davis is in a curious situation with the Chargers. He was an every-down corner in the slot last season, but after Los Angeles signed Bryce Callahan and J.C Jackson this offseason, his role has disappeared.

Davis played every snap in two games and didn’t play a single one in the other three. That’s a big contract for a part-time player.

When Jackson has been sidelined by his ankle injury, Davis has still been an every-down player. But when Jackson has been able to play — as he has the past couple of weeks — Davis doesn’t see a single defensive snap. Depth is great, but most teams would consider paying a cornerback who doesn’t see the field on defense most weeks a $7 million base salary to be a waste of money. Boyd would be a much more realistic (and less expensive) fourth or fifth cornerback for Los Angeles.

Kris Boyd has been a backup since he came into the league in the 7th round of the 2019 draft out of Texas. Boyd played just two snaps this season but is an important special teamer.

At 4-1, the Vikings have legitimate playoff aspirations and need help at cornerback. Chandon Sullivan has struggled as the team’s slot corner this season. The Vikings have allowed a 94.0 QBR to slot receivers, the fifth-worst mark in football. Minnesota would need the Chargers to eat some money to make this deal work, but Davis would be a significant upgrade in the slot and a possible solution next year, too.

The question is if Davis would actually be an upgrade over Sullivan. His PFF grades in recent years look eerily similar to the Vikings cornerback. However, there’s a reason why one of them was available in free agency and signed a cheap deal, and the other one received a big extension.

If the Vikings could make the cap work and think that Davis would be a significant upgrade, the deal is certainly an interesting idea. The Vikings have less than $1 million in cap space right now, so it’s hard to imagine a scenario in which the team could take the big cap hit of Davis. His cap hit after a trade would be $7.375 million. It’s much more likely that the Vikings will start Chandon Sullivan for the remainder of the season.