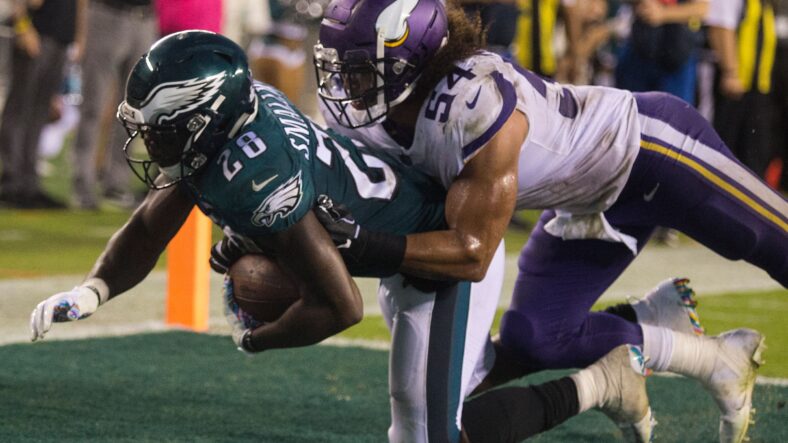 The Minnesota defensive front had a massive impact on the victory over Green Bay in week 1. They recorded 4 sacks, forced an Aaron Rodgers fumble, and came up with a stop on 4th and goal early in the game to claim momentum.

Philadelphia employs one of the best offensive lines in the league, anchored by All-Pros Jason Kelce and Lane Johnson. In 2021, that offensive line paved the way for an explosive running attack: Philly was second in the league in rushes of 10 or more yards, only behind Cleveland.

Furthermore, the front five don’t allow defenders to get to their quarterback, which Minnesota relied heavily on in their Week 1 win. Jalen Hurts was only sacked 26 times in 2021, which ranked 28th among quarterbacks [1].

Part of the reason Philadelphia allowed so few sacks is their style of play. In fact, Hurts was pressured at the 8th-highest clip among quarterbacks in 2021; Kirk Cousins was 7th [2]. Jalen’s ability to escape and scramble helps keep sacks low amidst high pressure rates. Additionally, sack totals remained low given the Eagles’ run-first offense with a mobile quarterback:  Hurts attempted only the 21st-most passes in 2021 [1].

Unlike the Aaron Rodgers-led Green Bay offense, Philly won’t be dropping back to pass as much. So, Minnesota simply won’t have as many opportunities to rush the passer.

Another advantage Philadelphia’s run game possesses is that they deploy three versatile running backs (plus the quarterback), keeping their playmakers fresh and giving defenses multiple versions of the run game to adjust to.

Now, the Vikings’ front was not only reliant on sacks to make an impact in Week 1, most clearly evidenced by the 4th-and-goal stuff early on. However, Green Bay could essentially have what they wanted in the ground game when they went to it, averaging 6.2 yards per carry.

Aaron Rodgers can still move a little, and it was clear the Vikings were trying to shut off his scramble lanes on Sunday afternoon to some degree. But for the most part, the Vikings pass rush was able to commit to getting home.

But Jalen Hurts is an entirely different animal, and containing his scrambling is a much bigger challenge. So, unlike in week 1, Za’Darius Smith and Danielle Hunter won’t be able just to pin their ears back and get the quarterback.

Additionally, in defending a mobile quarterback like Hurts, Minnesota will likely need to have a linebacker keep his eyes on Jalen at all times. Undoubtedly, Ed Donatell will vary his looks, changing the “spy” role to keep Hurts honest. Sometimes this will be Eric Kendricks or Jordan Hicks. At other times, this role will fall to Smith or Hunter.

Monday night football on the road provides a challenge that a normal Sunday afternoon does not. Facing a physical Philadelphia team with something to prove adds even more adversity. And for a pass rush that ate up Green Bay in Week 1, adjusting to a defensive game plan keying on the run while playing more conservatively against the pass complicates matters even more.

Ed Donatell’s defense will have their chance to show they are up for the challenge come 7:30 pm CT on Monday night in Philadelphia.