Vikings Win vs. Packers Shouldn’t Be a Surprise 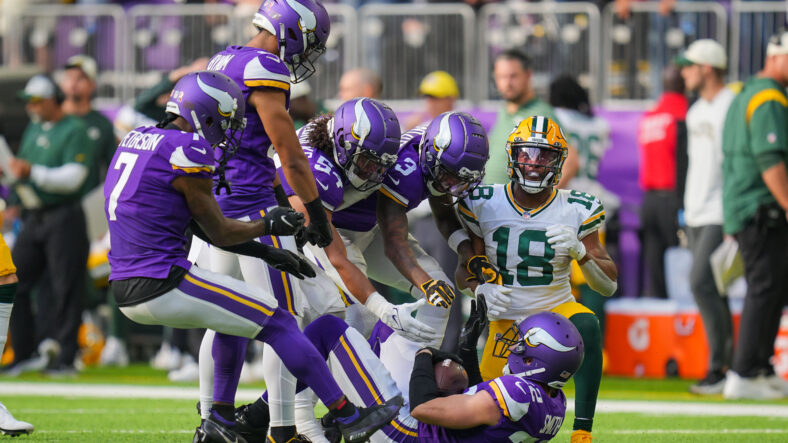 In one of the highest profile matchups to start the NFL season, the Vikings showed they are not to be taken lightly. For three hours on Sunday afternoon, the Vikings outplayed Green Bay in all three phases and started a new era with a resounding 23-7 win over the division favorite.

Kevin O’Connell’s squad put the NFL on notice, but we shouldn’t be surprised by the outcome. All signs pointed to Minnesota taking this contest, with Green Bay ravaged by injuries and trying to replace Davante Adams with a slew of inexperienced receivers.

Green Bay entered Week 1 far more banged up than you would hope before playing a real game. Without all-pro LT David Bakhtiari, RT Elgton Jenkins, and WR1 Allen Lazard, the Packers offense was a shell of itself, and it showed all afternoon.

Minnesota brought pressure, in different looks, to find the matchups they wanted with Green Bay’s patchwork offensive line. C Josh Myers came in with six career starts, LT Yosh Nijman eight, and Jake Hanson made his first career start; at a new position (RG) to boot. Additionally, Royce Newman took on a new role, shifting from guard to tackle in place of Jenkins. Za’Darius Smith and Danielle Hunter were disrupters from the start, each recording a sack and bringing constant pressure to the Packers’ Hall of Fame quarterback.

With no Davante Adams and Allen Lazard, Rodgers held the ball longer than we’ve become accustomed to, which gave more time for the Vikings’ head-hunting pass rush to find their target. Even on a 3rd-down play when Rodgers eluded Dalvin Tomlinson and Hunter to scramble out to the right, his inability to find an open receiver resulted in another punishing sack from DJ Wonnum.

Not only are the Packers adjusting to life without one of the best receivers in the league, four of Rodgers’ seven wide receivers were playing in their first game with him. There was no continuity between number 12 and his pass catchers, which showed from the first offensive snap. Rookie WR Christian Watson, another highly-touted NDSU product, dropped a would-be touchdown after torching elder statesman Patrick Peterson on a double move, setting the tone for the rest of the day.

Although Rodgers denied that the drop affected his frustration, it was clear that from that point forward, his and Green Bay’s body language changed. Up and down the sideline, there were blank stares from veterans and youngsters alike: Green Bay’s weaknesses had been exposed, and there wasn’t anything they could do about it.

These aren’t excuses for Green Bay; on the contrary. Minnesota saw areas of weakness and exploited their opponent.

The Vikings came into this game with clear advantages and made sure to use them to their benefit. This game was not a fluke and should not surprise too many folks. Green Bay will undoubtedly be better as the season rolls on, but Week 1 was Minnesota’s game to lose. They were at home, starting a new and exciting era, with a healthy roster out to prove something against a beat-up and inexperienced offensive unit.

The Vikings are where we expected them to be after one game. On to Philadelphia.