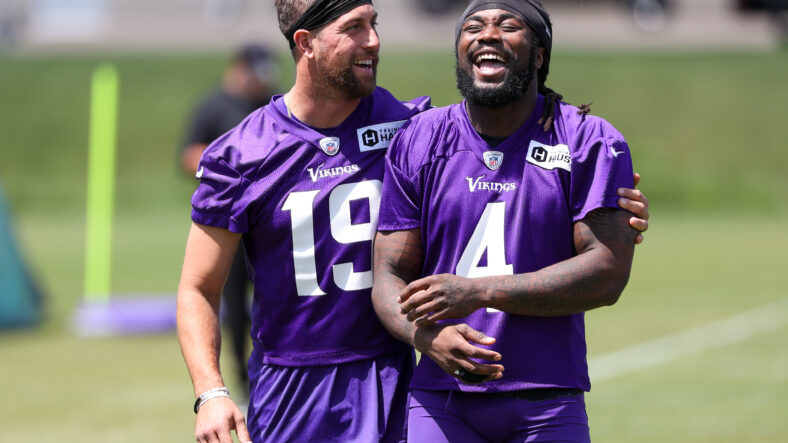 The NFL docked Cook $7,426 for the infraction, as tossing the ball into the crowd has never been permissible. Some players simply don’t care because the fine for a multi-millionaire is menial.

Well, to a degree, the fine irked Cook, as the 26-year-old opted for an “online remedial training course,” hoping to reduce the penalty to $5,941. Doing so is reminiscent of LeBron James in the film Trainwreck, but Cook also had a little fun via self-deprecation.

Cook tweeted on Tuesday as if he was a student in trouble, typing the same “I will not” line four times in succession:

Leaguewide, Cook is known as “one of the good guys,” so a fine for chucking the ball after a touchdown is on-brand. The even-keeled playmaker doesn’t rock the boat too much on the field.

The Vikings had a bye in Week 7, but it wasn’t all sunshine and rainbows. Evidently staying in Miami after the win over the Dolphins, offensive lineman Oli Udoh was arrested at a nightclub for resisting an officer without violence.

Cook and the Vikings are humming with a 5-1 record after six games, enjoying a bye in Week 7 to prepare for the up-and-down Arizona Cardinals. The Kyler Murray-led franchise is 3-4 through seven weeks, and no one quite knows if the team is “figuring it out” or destined for a mediocre record and subsequent January coaching change. In Week 6, the Cardinals scored nine points versus the Seattle Seahawks but rebounded the following week by handily dropping the New Saints in the desert, 42-34.

Fresh off the fine, Cook gets a crack at the Cardinals and their stingy rush defense. Arizona ranks sixth in NFL per rushing yards allowed through Week 7.

The Vikings are favored by 3.5 points to defeat the Cardinals.