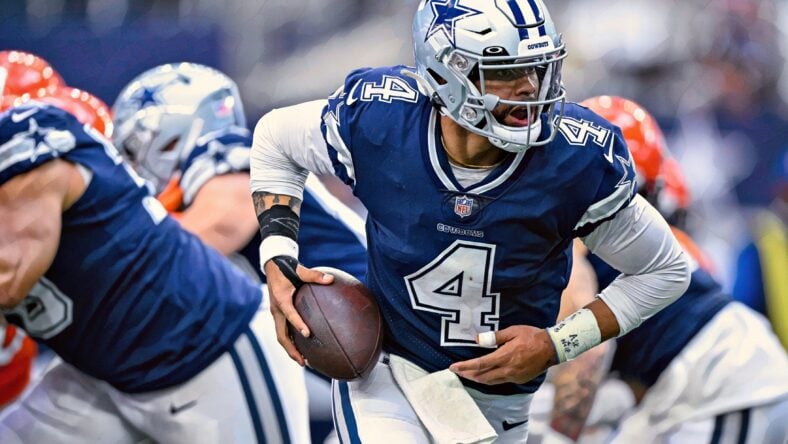 The Dallas Cowboys (6-3) know their Week 11 date with the Minnesota Vikings (8-1) at U.S. Bank Stadium is one with mighty stakes.

Dallas lost last weekend to the Green Bay Packers, 31-28, after melting down in the 4th Quarter. Accordingly, its margin for error at Minnesota is slim, especially for winning the NFC East, and quarterback Dak Prescott acknowledged so on Thursday.

The 27-year-old said the Cowboys are up for proving “the team that we are in all aspects of our game.”

Prescott and Co. must suddenly keep pace with the division-frontrunning Philadelphia Eagles — a team that signed Ndamukong Suh on Thursday — and the upstart New York Giants. The Eagles are 8-1, while the Giants feel pretty spiffy at 7-2 with a first-year head coach. The Cowboys record of 6-3 isn’t shabby either, but the NFC East has become an unexpected arms race.

The Vikings, on the other hand, have nearly wrapped up their division by Thanksgiving. Kevin O’Connell’s group has a “magic number” of four, only needing that many wins or Packers losses — or a combination thereof — to win the NFC North for the first time since 2017. Minnesota is likely to consider Week 11 a playoff-ish atmosphere as well, but the sky won’t fall if the Vikings drop a game. That’s how soft Minnesota’s cushion is through nine games.

Minnesota has a 4.5-game division lead on the Packers, who recently helped its rival by embarking on a five-game losing streak. Meanwhile, Dallas is two games back of Philadelphia and cannot afford to drop another game. Doing so would relegate the Cowboys to honest-to-goodness sixth- or seventh-seed NFC postseason chatter.

Vegas believes in the Cowboys, though. Dallas is inexplicably a 1.5-point favorite to defeat the Vikings on Sunday, a bizarre point spread because a home team is usually awarded three points right off the bat. Minnesota hasn’t received such respect, and sportsbooks evidently believe that Dallas is “4.5 points better” than the Vikings.

Since then, the Vikings have lost twice at home to Dallas — with Prescott on the sidelines due to injury.

The Vikings haven’t beaten the Cowboys in that state of Minnesota since 2010 when Brett Favre was the quarterback, and Randy Moss experienced his first home game back as a member of the purple team.

The Cowboys have a 93% chance of reaching the playoffs, per FiveThirtyEight.com.