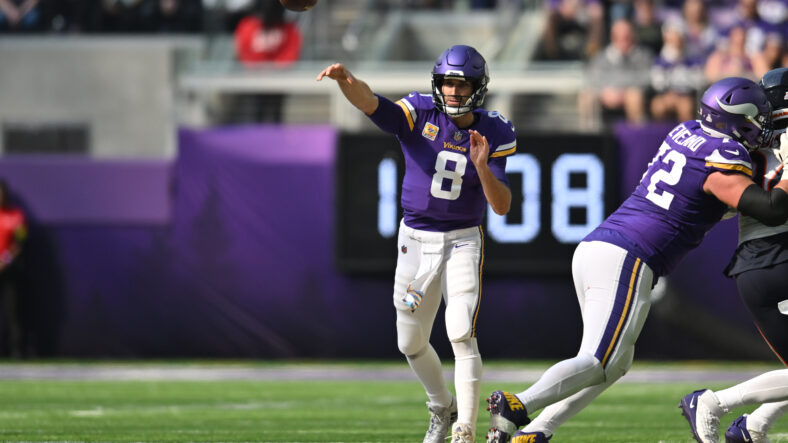 Whenever a team starts with a near-flawless record into the season, the quarterback automatically gets some MVP consideration. Kirk Cousins and his Vikings are comfortably sitting at the top of the NFC North standings with a 5-1 record, and the quarterback is getting some buzz to win the trophy.

In the history of the Vikings franchise, only three players have won the prestigious award. In 1971, defensive tackle Alan Page was awarded the MVP. His Vikings, led by Bud Grant, had won 11 of the 14 games and allowed just 139 points. Of course, one of the ‘Purple People Eaters’ had to get the trophy, and Page played a fantastic season. Page is still one of only two defensive players to win the award, followed only by Lawrence Taylor in 1986.

The next Vikings MVP was Fran Tarkenton in 1975. Another powerhouse Vikings team, the 1975 unit, won the first ten games and finished the season with a 12-2 record. Tarkenton threw for 25 touchdowns, the second-highest number in his career.

The final Vikings MVP was Adrian Peterson in 2012. He carried his team to the postseason after returning from a torn ACL suffered at the end of the 2011 season. He rushed for 2,097 yards and became the final non-quarterback to win the MVP award.

Nowadays, the MVP is almost exclusively a quarterback award. Even dominant defensive players like T.J. Watt in 2021 are in contention but don’t come close to beating quarterbacks like Aaron Rodgers in, for their standards, average seasons.

Because it’s a quarterback award, there are only 32 potential candidates, and half can be ruled out because of the lack of talent to put up big numbers. That’s where Kirk Cousins makes his entrance. His numbers are always at a consistently high level. He’s scoring about 30 touchdowns yearly with relatively low interception totals and gains more than 4,000 yards.

His problem in recent years was the team’s record. While the quarterback is not solely responsible for the number of games won, he’s still getting eliminated if the win total is not good enough. The only time Cousins has reached the playoffs in a Vikings uniform was in 2019, and he didn’t have his best statistical performance in that season, partly because he was rested in the final game of the season. Cousins managed to find the end zone 26 times and threw just 6 interceptions in the Stefanski-coordinated season.

His 2022 performances have not been great but relatively consistent, while the team is in a comfortable multi-game lead in the division entering the bye week. An MVP needs two things: good statistics and a good team record. He is on pace for 4,256 passing yards, 26 passing touchdowns, and 14 interceptions. In a ranking of quarterbacks that considers multiple vital advanced statistics, Cousins is currently ranking just outside of the top 10, while he ranked at No. 7 after the 2021 season.

His statistics are currently down from last year, but the Vikings are on pace to win 14 games. The Vikings’ quarterback also deserves credit for playing his best football in the most important drives. He already led three game-winning drives. The narrative of the not-clutch quarterback quietly disappeared.

Different sportsbooks have different odds, but Cousins is in the top 10 in all of them. Most have him trailing only Josh Allen, Jalen Hurts, Patrick Mahomes, Lamar Jackson, and Justin Herbert. Some have Joe Burrow ahead of him.

ESPN has Cousins in the MVP watch just outside of the top 5. They place his odds at +4000.

Cousins broke the Vikings’ franchise record for consecutive completions when he started 17-of-17 in a Week 5 win over the Bears and followed that up by throwing for two touchdown passes in a win over the Miami Dolphins. Coming off his third Pro Bowl season, the 34-year-old has yet to throw for 300 yards in a game, but his efficient play has the Vikings off to a 5-1 start.

Cousins and the whole Vikings team now have the opportunity to take a few days off of football. The last months were hard, as the team learned a lot of new things, including a new playbook and a new scheme. That led to various miscommunications and bad play in general. There’s a lot to clear up, but the team is winning, and learning is much more fun in a winning culture. The team also has the luxury to take time to learn new things, as opposed to recent years in which the Vikings had must-win game after must-win game because of slow starts to the season.

It’s certainly possible that the offense looks much more dynamic and explosive after the bye week. If that’s the case and the Vikings keep up their winning record, Cousins will rightfully be involved in the MVP conversation.