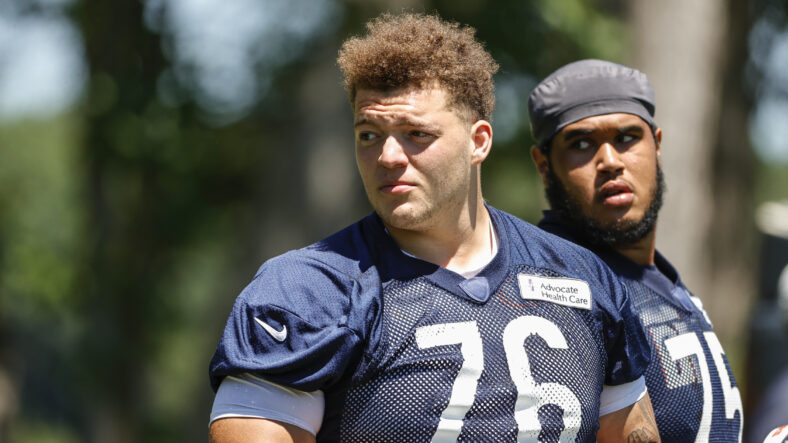 The Minnesota Vikings secondary rival, the Chicago Bears, is reportedly shopping second-year tackle Teven Jenkins. The franchise selected Jenkins 15 months ago in the 2nd Round of the 2021 NFL Draft.

Like the Vikings, the Bears completely changed leadership at the turn of the year, welcoming general manager Ryan Poles and head coach Matt Eberflus to the organization. And if the Rapoport tweet is correct, perhaps Jenkins is not in the long-term plan for Chicago’s trenches.

Jenkins was pegged at a Top 10 OT in last year’s draft class, even involved in Vikings draft-themed chatter if the franchise had traded into the 2nd Round. Instead, Minnesota traded back in the 1st-Round, landing left tackle Christian Darrisaw, quarterback Kellen Mond, and guard Wyatt Davis in a deal with the New York Jets.

The Bears may be low on Jenkins because of his 2021 performance. He registered a 47.5 grade from Pro Football Focus, which would have ranked third-worst in the NFL among all tackles if Jenkins qualified for the PFF minimum snap count. All told, Jenkins played in six games last year and 161 of the Bears offensive snaps.

Trading Jenkins, who’s only been around for a single season, would be an odd move, as heading into 2022, Chicago’s offensive line is considered one of the worst in football. PFF also ranked teams by offensive line personnel in June, placing the Bears at second-worst in the business behind only the Seattle Seahawks. The Vikings ranked 19th on the same list.

Minnesota won’t be involved in the Jenkins sweepstakes for a couple of reasons. Outside of general manager Kwesi Adofo-Mensah’s trades in April’s draft, divisional foes rarely barter together. Plus, the Vikings have two quality starters in Brian O’Neill and the aforementioned Darrisaw at tackle. The depth tackles include Jesse Davis, a free agent from the Miami Dolphins, and Oli Udoh, who was curiously moved to guard in 2021 — a shift from his natural position. Udoh wasn’t the 2021 solution at guard but is a serviceable backup tackle.

Whichever team lands Jenkins can probably use a late-round pick for trade capital in the deal. The Oklahoma State alumnus missed a fifth straight day of Bears training camp on Tuesday.

The Vikings play the Bears in 67 days, a Week 5 bout at U.S. Bank Stadium.