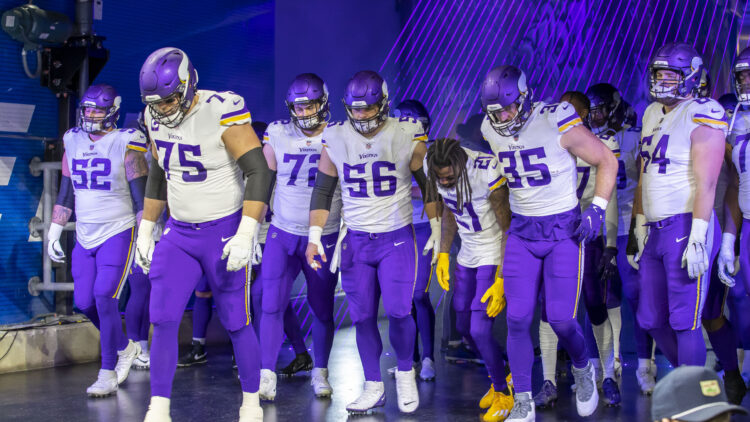 But when Mike Renner from PFF published the 2022 edition of the rankings on Monday, this time the Vikings weren’t so lousy. In fact, Minnesota has its best OL trajectory in five years.

Minnesota ranked 19th for offensive line outlook per Renner, the team’s highest mark entering a season since 2017 when the Vikings were 14th. Somehow, 19th is a good thing for Minnesota and its fans because, generally speaking, the Vikings are in the mid or low-2os for OL prestige heading into a season.

Renner noted on the Vikings 2022 offensive line, “This could sneakily be the best offensive line of quarterback Kirk Cousins‘ Vikings career. Much of that, though, comes down to the development of the team’s 2021 first-round pick, Christian Darrisaw.”

PFF based the 19th ranking on this fivesome of Vikings starters upfront: Christian Darrisaw (LT), Ezra Cleveland (LG), Garrett Bradbury (C), Ed Ingram (RG), and Brian O’Neill (RT). And while that group is probably accurate for personnel, it is not yet solidified.

At Vikings minicamp last week, a free agent from the Miami Dolphins, Jesse Davis, took starting snaps at right guard. Until Ingram signs his rookie contract, Davis is considered the for-now frontrunner to start at RG. Next to Davis, or whoever eventually plays RG, is Bradbury at center. He isn’t a shoo-in to start in September either. Bradbury was selected with 1st-Round draft stock three years ago, so he’s received the benefit of the doubt longer than most. But Bradbury’s pass protection is a mess, causing his grip on the starting grip to slacken. Free-agent Chris Reed from the Indianapolis Colts or veteran Austin Schlottmann have an outside chance of stealing Bradbury’s job.

The others spots, however, are solid. Darrisaw looks to build on his commendable rookie campaign from 2021. Cleveland nestled in nicely as the Vikings starting left guard in 2021, tallying a 68.6 grade from PFF. And O’Neill is a Pro Bowler.

Overall, the Vikings are in a familiar spot. The collaboration of the offensive line boils down to the right guard and center not playing putrid. Thankfully, a new general manager and coaching staff are in the house to take a stab at solutions. They’re overdue.

And it just so happens that PFF believes the Vikings offensive trenches in 2022 will perform better than years past.