After Rudolph to TB, 3 Big-Name Vikings from 2021 Remain Unsigned 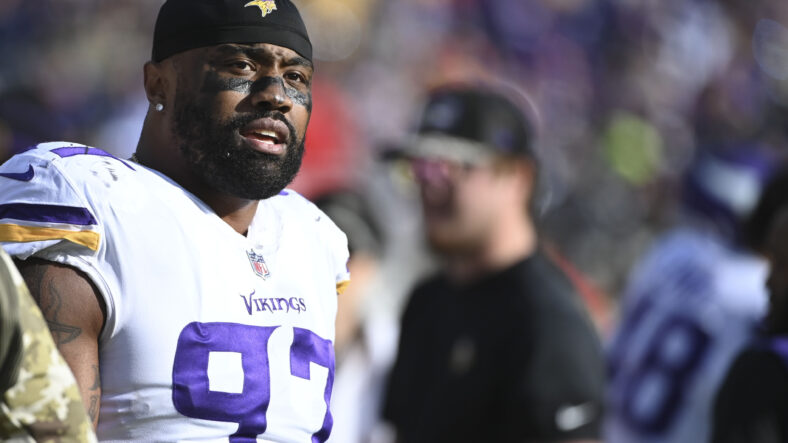 Kyle Rudolph effectuated a Great American Ring Chase, signing with the Tampa Bay Buccaneers in July. He’ll join Tom Brady on the quarterback’s quest for an eighth Super Bowl triumph, presumably with Rudolph as a TE1 or TE2.

According to Rudolph, he had an appetite for a Vikings reunion in 2022 after a one-year hiatus with the New York Giants. But that didn’t materialize. In addition to Rudolph, other big-name Vikings remain unsigned, three in particular from the 2021 defense.

Barr is 30 years old and proved he can still play at a high level in 2021, evidenced by a decent 62.9 grade from Pro Football Focus. He even chipped in three interceptions, a career-high. But murmurs of injuries have permeated his offseason, as some prominent Vikings-related voices have suggested that the linebacker could retire.

Still, the Dallas Cowboys are interested in Barr, albeit in an on-and-off manner. The latest? Jerry Jones and his pals are evaluating their current LB corps in training camp, hoping to determine if Barr is needed. If so, they’ll reportedly make the call.

Otherwise, Barr is free to sign anywhere at any time, although free-agent Jordan Hicks took his job with the Vikings.

A longtime Vikings staple, Griffen was tremendous in 2021 until he encountered a mental health circumstance that caused him to take the rest of the season off after Week 10. His pal Danielle Hunter was lost for the season on Halloween, and Griffen brought the pass-rushing heat in Hunter’s stead.

In February, Griffen told Chris Tomasson of the Pioneer Press he planned to play with an NFL team in 2022. “Yeah, of course, I’m looking to play again,” Griffen declared.

This poor guy was hoodwinked twice by the Vikings, convincing the defensive tackle that Minnesota was a contender. In separate stints, Richardson spent the 2018 and 2021 seasons with Vikings, both of which ended with whimpers.

Former head coach Mike Zimmer even used Richardson as an EDGE rusher, at times, in 2021, showcasing the veteran’s versatility. The experiment was surprisingly successful — or at least a patchwork solution.

With a 62.1 PFF score in 2021, Richardson has been involved in the rumor mills of the Cleveland Browns, Tampa Bay Buccaneers, and Detroit Lions.