A Battle to Watch in Vikings Training Camp 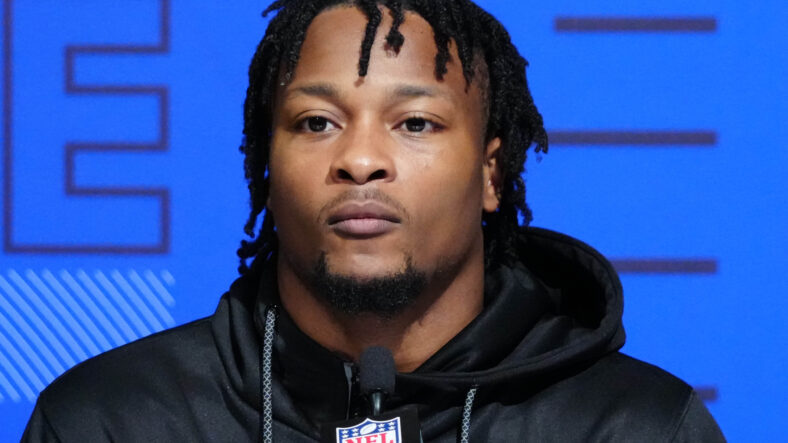 Every year there are interesting battles in the Vikings’ training camp. Some players try to claim a starting job, while others try to make the 53-man roster. In 2022, head coach Kevin O’Connell and general manager Kwesi Adofo-Mensah have to make hard decisions with battles on multiple positions.

One of the battles will take place between running backs. Dalvin Cook obviously gets one roster spot. Since he came into the league in 2017, Cook racked up the third-most rushing yards in the NFL, only behind Derrick Henry and Ezekiel Elliott. His 86.1 rushing yards per game rank him eighth in NFL history, higher than players like Adrian Peterson and LaDainian Tomlinson.

The Vikings’ offense slowly becomes more pass-heavy, and at some point, Dalvin Cook will slow down, as running backs mostly do during their second contracts. However, Cook will still be a fixture in Kevin O’Connell’s offense in the near future.

Another running back spot is filled by Kene Nwangwu. The electric return specialist of the Vikings is indispensable and will not be included in a battle during training camp. The new offensive coaching staff has to determine if Nwangwu and his generational speed can be used on offense. At Iowa State, he recorded over five yards per carry. It’s doubtful he’ll ever transform into a true workhorse running back, but the electric special teamer can be a dangerous weapon on certain plays. He should be viewed as a third running back on the depth chart.

Dalvin Cook is the top half back on the roster, and Kene Nwangwu is RB3. The battle between fourth-year player Alexander Mattison and rookie Ty Chandler is for the final running back spot.

Mattison is an interesting figure. Since Rick Spielman selected him in the third round of the 2019 NFL Draft, he has been the primary backup for the star in the backfield, Dalvin Cook. Vikings fans claimed that he could start for multiple other teams. However, he struggled at times, especially in 2021.

The former Boise State standout finished the season with atrocious 3.7 yards per carry. 134 carries and just 491 yards is not the stat line of a good running back in the NFL. Some of the struggles can be attributed to the offensive line, as Dalvin Cook didn’t have his best season either. But the advanced stats paint a different picture. The next-gen stats show that he recorded -59 yards over expected, which results in an average of -0.44 yards per carry. Meanwhile, Dalvin Cook recorded 0.34 yards per carry over expected. Mattison’s PFF grade of 61.0 ranked him at position 54 of 62 eligible half-backs.

His advantage over his challenger is the experience. In three seasons in the NFL, Mattison rushed the ball 330 times. During his college career at Boise State, he had 582 carries and was a true workhorse in his final two seasons. However, despite having more experience, Mattison is about five weeks young than Chandler.

When he was asked to fill in for the injured Dalvin Cook, Mattison had some impressive showings. He had six career starts and recorded at least 100 yards in two of them. In those six games, he totaled 477 rushing yards, 216 receiving yards, and five total touchdowns. The yards per carry were just 4.1, a pedestrian number.

Kwesi Adofo-Mensah selected a running back among nine other rookies in his first draft class. Chandler played his first four seasons in college in Tennessee, where he never had more than 655 rushing yards and four touchdowns in one season. He transferred to play for the North Carolina Tar Heels, where he recorded 1308 scrimmage yards and 14 touchdowns.

The draft pick made sense, although it caused some confusion at first. Mattison is in the final year of his rookie contract. In addition to that, he hasn’t played at a very high level. Chandler is a succession plan for the backup running back spot and instant competition for Mattison in one person.

His 4.38 40-yard dash is a lot faster than Mattison’s 4.67. Chandler is a home run threat every time he touches the ball. Another difference is the vision. Mattison struggled at times in the past to find the holes, while it is one of Chandler’s biggest strengths. In the modern NFL, pass-catching is an important skill of running backs. Chandler is a capable pass catcher, and most people saw some impressive grabs on his highlight tape.

FBs Are RBs, too

The Vikings may carry four running backs into the season on the 53-man roster. However, C.J. Ham, the fullback, has to be part of the thought process. He was an essential part of the offense in recent years. It’s unclear what his role will look like in O’Connell’s offense. However, Ham can be an emergency running back and is a great special teamer. He’ll probably be on the roster, which makes it hard to believe that four additional running backs are part of it, too. Therefore, Chandler and Mattison will have a battle for the final spot in the Vikings’ running back room, and it will be a fun one to watch during training camp and in preseason games.