4 Losers of the Vikings Game vs. Raiders 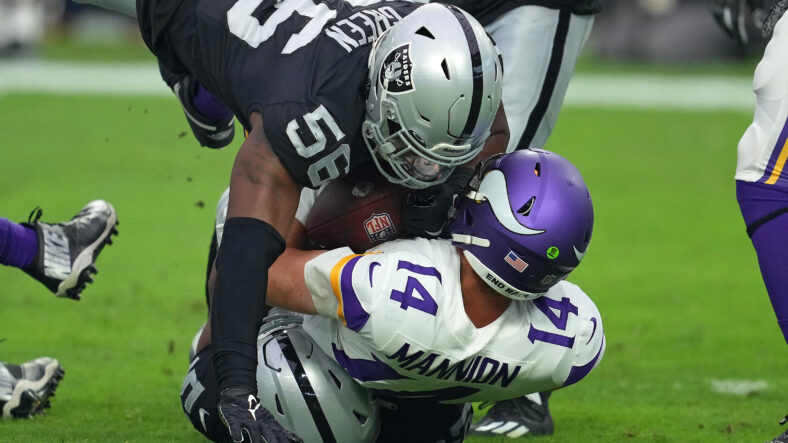 The Vikings lost their first preseason game against the Las Vegas Raiders. The results don’t matter in the preseason. What matters much more is the player evaluation. Some Vikings players had a great game, while others struggled.

The following players all struggled and didn’t have their best day.

The cornerback stood out negatively in the Vikings first preseason game. He was targeted four times per PFF and allowed four completions and a touchdown. On the touchdown, he got burnt on a crossing route and then missed the tackle, allowing undrafted rookie DJ Turner to turn the corner for a 35-yard touchdown reception.

In addition, he drew a flag for illegal contact that resulted in a first down for the Raiders. Without the penalty, the Raiders would’ve faced a third and long after a Wonnum sack.

He also missed a tackle in the second quarter. Dantzler had to clean it up. It could’ve been a great play by Nickerson blowing up the checkdown pass in the flat after reading the play perfectly, but instead, it was a negative play for the cornerback.

Not all was bad, as he recorded a tackle for loss on a wide receiver screen after ducking under the block of a tight end.

The Vikings backup quarterback for 2019, 2020, and 2021 was brought back to compete with Kellen Mond for the same job once again. He looked like Sean Mannion, an uninspiring quarterback without any special physical tools for an NFL quarterback. The veteran missed multiple throws playing with the starters in the first quarter, had two tipped passes, and Raiders linebacker Jayon Brown dropped an easy interception. He also overthrew a Vikings receiver on a fade route in the corner of the end zone by a wide margin.

Kellen Mond, meanwhile, had a good game. He also struggled at the beginning but played really well in the second half. Mannion led a three-and-out in the fourth quarter against subpar competition. The drive was sandwiched by two Mond touchdown drives.

Mannion, the veteran passer, needs to have a better outing next week to have a chance of winning the battle.

All five starters played in the game for two drives. Christian Darrisaw and Brian O’Neill were the tackles, Jesse Davis and Ezra Cleveland the guards, and Garrett Bradbury started at center.

The Raiders were without star pass rushers Chandler Jones and Maxx Crosby and starting defensive tackles Johnathan Hankins and Bilal Nichols, and still put pressure on Mannion and stuffing runs of running back Alexander Mattison.

The second-team offensive line came in and dominated the Raiders. They showed much more energy. The interior struggles are nothing new for the Vikings. The news is that Brian O’Neill didn’t play at his usual high level. The 2021 Pro Bowler is not in midseason form yet.

Ed Ingram will soon usurp Jesse Davis on the depth chart. He seems to have much more talent and is simply manhandling defensive tackles. Center Garrett Bradbury might get replaced, as the Vikings are rumored to look for a center on the trade market. After all the investments in the offseason, the offensive line is still an issue.

The second-year linebacker is still a big project. He started his college career as a quarterback for North Carolina and later moved to linebacker. He lacks fundamentals and, therefore, is out of position regularly and misses tackles. Surratt shared the field with fellow linebackers Brian Asamoah and Blake Lynch, who looked a lot better. It will not be surprising if the 2021 third-rounder doesn’t make the 53-man roster.

The Vikings have to cut five players on Tuesday. The 49ers will come to town for joint practices on Wednesday and Thursday before the two teams face off on Saturday for their second preseason game.