VT Breakdown: Vikings get manhandled by the Boys—What Now?

The Minnesota Vikings, fresh off a thrilling win in the “best game of the season” laid such a big egg on Sunday it can easily be considered the worst game of the season—for Minnesota fans, for sure. Starting with the first pass play of the game for the Purple, Micah Parsons chased down quarterback Kirk Cousins, creating a strip sack and fumble recovery that immediately erased any advantage the typically fast-starting Vikings had by taking the opening kickoff. The Cowboys turned that turnover into a quick three points and never looked back.

Dallas dominated the game of the trenches on both sides of the line and they harassed Cousins all afternoon (more pressures than he has ever faced—63 percent—and seven sacks). By the time “mercy rules” were in place and backups were in the game, the Cowboys had a 40-3 lead, and the Vikings starters were on the bench looking at their hands, trying to understand what just happened.

At this point, it is still hard to know what we all just saw, but we can be sure that the accusations of the Vikings being the worst 8-2, second-seeded playoff team in league history will be back in full force—and who can argue with it? As good and encouraging as they looked last week competing against the preseason Super Bowl favorite Buffalo Bills on the road, that’s how bad and dispiriting they appeared at home against a team that was beaten just one week earlier by the lowly Green Bay Packers. Everything we thought about this team and hoped for going forward is suddenly called into question.

Is the very competitive rebuild morphing into a middle-of-the-road remodel? Has the offensive line been exposed to such a degree that the Vikings have to start looking for help? Has nervous Kirk returned and is prime-time Kirk lurking around to reappear on Thursday night? Did the defense forget how to defend the pass and the run? It will be hard for the Purple Faithful to shout down the doubters.

What is good, however, is that on Thursday the Vikings get a chance to eat some turkey and cleanse their palate from this Dallas debacle. The Vikings will host the New England Patriots on Thanksgiving night, and I am sure they are thankful for that scheduling. I know Vikings fans are ready to put it behind them.

Well, we here at the Vikings Territory Breakdown podcast are anxious to join them. Joe Oberle from the VikingsTerritory and purplePTSD and Mark Craig from the Star Tribune will be on hand to stick a fork in the past game and grab a spoonful of Patriots preview. Tune-in and check it out. Here’s hoping that Vikings fans experience a great Turkey Day and Night!

Vikings Territory Breakdown is Sponsored by: Manscaped
Use VTBREAKDOWN20 to get 20% off you order for the holidays. 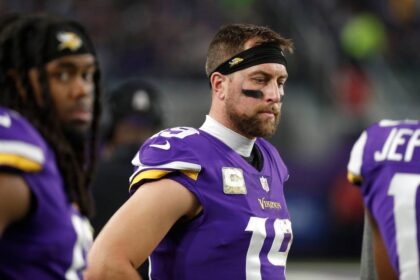 Vikings Territory Also Read:
No Silver Linings for the Vikings on Sunday, The Stats Just Make it Worse…