Will the Vikings Take Kyle Hamilton if Available at #12? 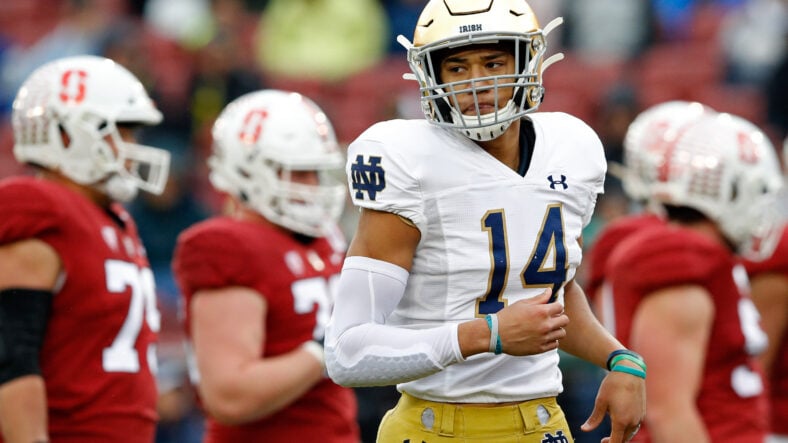 The NFL draft is less than two weeks away.

Yes, the fans are excited, and front offices and coaches continue to grind it out.

Who will the Minnesota Vikings take at pick 12? Will they perhaps trade down or even up? That will be very interesting to find out.

There is a good possibility they will take a cornerback. Patrick Peterson was re-signed and former Green Bay Packer Chandon Sullivan was signed. Both, however, were only signed for one year, and you can never have enough cornerbacks, especially when you are facing Aaron Rodgers twice in a season. Cameron Dantzler did not perform as well as many expected. He can still be a very good cornerback in this league, but it certainly would not hurt to add another corner.

LSU’s Derek Stingley could be available when they select, along with Washington’s Trent McDuffie

What if they do not take a cornerback? What route will they go? Well, if Notre Dame safety Kyle Hamilton is available when they pick, maybe they could take him.

Harrison Smith is still one of the best safeties in the league, but he is also 33 years old and could only be around for three more years after this season, at most. Camryn Bynum looked good in his three starts last season as a rookie. He and Hamilton would make good competition, and whoever does not start this year could still do so later for years to come.

Often, it is good to draft for need, but not always. Some players are just too good to pass up regardless of what position they play. In 1998, Minnesota did not need a wide receiver. They had one of the best tandems in the league in Cris Carter and Jake Reed. They took Randy Moss, and he proved to be a great pick. They went 15-1 the following season and broke the NFL scoring record.

In 2007, they did not need a running back since Chester Taylor rushed for 1,296 yards the previous year. Adrian Peterson, though, was available, and they took him. Another great pick. He is the all-time leading rusher in franchise history.

Many, at the time, felt Minnesota should have taken quarterback Brady Quinn instead of Peterson, given Tarvaris Jackson was such an unknown commodity at the time. They certainly made the right decision.

Whether you draft for need or the best player available, either strategy could come back to haunt you. That is a big part of the draft, though. Makes it more interesting too.