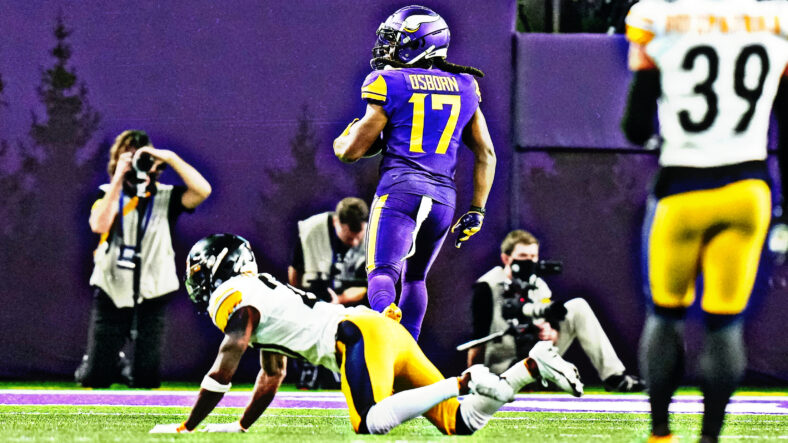 About four NFL teams are rumored in the mix to trade with the Minnesota Vikings on the first night of the 2022 NFL Draft — the Chargers, Chiefs, Saints, and Steelers.

Of the foursome, the Steelers may be the most realistic as they’re an AFC team — the Vikings enjoy trading with AFC teams — and Pittsburgh probably needs a quarterback.

In March, the Steelers signed free-agent passer Mitchell Trubisky, and some immediately coined that as a solution, geared at a reclamation project for the former Chicago Bear. After the dust settled, though, it seemed more sensible that Trubisky was a patchover option to an eventual rookie quarterback, one who could be plucked in the draft this month.

However, Pittsburgh owns the 20th overall pick, which may be a nasty spot to inhabit if the plan is indeed to seize a QB1 from the event. The Steelers might need to trade up for Malik Willis or Kenny Pickett.

Insert the Vikings and their 12th overall pick.

The Vikings were long linked to Ahmad Gardner and Derek Stingley Jr. for this draft, but those men’s stocks have risen too high for Minnesota to “be sure” about their availability at #12. For long-term planning, Minnesota needs cornerbacks, and that was the goal with potentially landing Gardner or Stingley Jr.

If Garnder and Stingley Jr. are not organically available for Kwesi Adofo-Mensah, he can probably trade back — with the Steelers, for instance — and net a CB like Trent McDuffie. And there are two practical trade packages for a Vikings-Steelers swap.

This hypothetical deal would essentially give the Vikings a pathway to a corner like McDuffie or Andrew Booth Jr. while adding another 2nd-Round pick to bolster roster depth. Adofo-Mensah could conceivably use the extra 2nd-Rounder on an EDGE rusher or high-flying wide receiver, as recent history proves marvelous WRs tunnel out of the 2nd Round.

Here, Minnesota would pad next year’s draft. This trade package was published by Bleacher Report on Thursday. Kristopher Knox wrote the Vikings could “capitalize on the market by allowing Pittsburgh to jump potential quarterback suitors in the Texans and Saints.”

The Vikings would also reclaim a 4th-Rounder from the forgettable Chris Herndon trade of 2021. Former general manager Rick Spielman shipped Minnesota’s 2022 4th-Round pick to the New York Jets for a tight end who was targeted seven times all season.

The Steelers trade idea boils down to a simple question. Is Pittsburgh more likely to embark on life-after-Roethlisberger with Mitchell Trubisky? Or is he a bridge-quarterback type of player?

If your answer is the latter, the Steelers could reasonably call the Vikings on draft night.