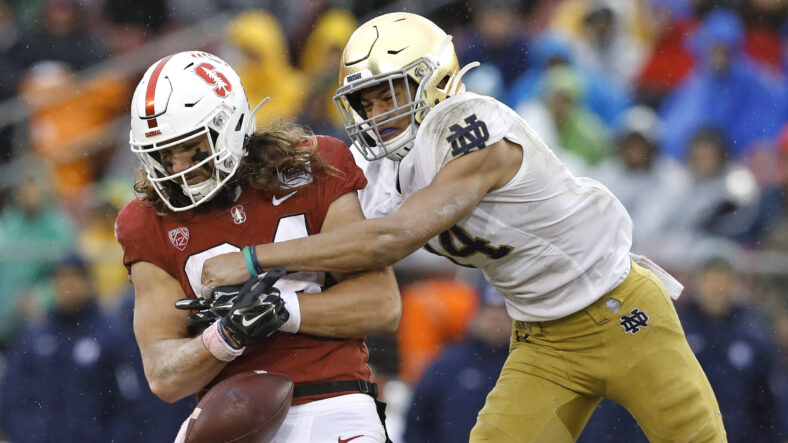 In a bit of a surprise turn of events, Kwesi and the Vikings decided to trade to the Lions. Most people thought they were likely to trade, but no one saw them dealing with the Lions. Moving back to the 32nd overall pick means the Vikings passed on multiple blue-chip players.

This is not exactly what I expected to see. There was likely going to be a trade down after Stingley and Gardner were off the board. However, moving to the end of the first round was — bold?

One player they had an opportunity to take was Kyle Hamilton. This kid was at one point considered a top-5 pick in the NFL Draft. To have him fall perfectly to the Vikings at 12th overall seemed like a slam dunk.

However, Kwesi had other plans and decided to pass on him. We will see how this turns out, considering they drafted Lewis Cine. Although, it feels like they really missed out on a perennial all-pro in Hamilton.

On top of that, they gave the Lions one of the best wide receivers in the draft. Jameson Williams, had it not been for a torn ACL, would have likely been the first wide receiver taken. Now, because of the trade, the Vikings will have to face this kid twice per year for probably five years.

And the kicker is, we don’t have much depth at cornerback. The winner of this trade won’t be decided for a couple of years. Although, right now, it really feels like the Vikings lost this one.

Other Players the Vikings Passed On

My favorite picks at 12 overall were Stingley, Williams, or Hamilton. However, there was another guy I would have loved to see in purple. An absolute monster of a human. Yep, Jordan Davis.

Jordan Davis is one of those prospects no one paid attention to until his eye-popping combine performance. He showed that not only is he a monster, but he is also athletically gifted. Many thought that he was just a running stuffing defensive tackle.

However, this was just because that is what Georgia asked him to do. He was responsible for eating up double teams so Travon Walker (number 1 overall pick) could roam around and feast. Jordan Davis will be allowed to do so much more in the NFL, and the Vikings passed up on all of that potential.

Other players that could have been a good fit:

After saying all of this, it is essential to remember one thing. We shouldn’t judge Kwesi and the Vikings off of who they didn’t draft. We should judge them on who they did draft. That man is Lewis Cine, and he has the potential to become a very good player.

However, I will remain baffled as to why they passed over Kyle Hamilton for Lewis Cine. Both of these guys play the same position, but Hamilton does it better. But I digress. Let’s see what day 2 of the draft brings us.