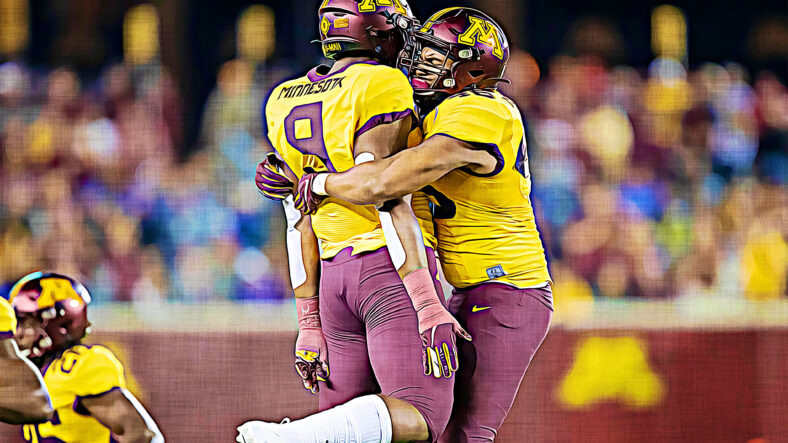 In the Super Bowl era, the Minnesota Vikings have selected 15 University of Minnesota players in the NFL Draft.

And if the draft board falls accordingly, the Vikings could welcome the 16th Gopher into purple and gold clothes. Minnesota recently met with defensive lineman Esezi Otomewo.

Considered a developmental-type player, Otomewo shouldn’t be considered an end-all for the Vikings solutions in the draft. But he does possess some intriguing potential, according to Kyle Crabbs from The Draft Network:

“Otomewo is a powerful player with heavy hands and a lot of length. I’d like him best in a gap-control defense that asks him to stack and read blocks before implementing shedding techniques and continuing in pursuit of the football.“

Standing 6’6″ and 282 pounds, Otomewo is an EDGE rusher possessing 4th-Round-or-so draft stock. The Vikings, unfortunately, don’t have a 4th-Round pick, as that asset was traded to the New York Jets last summer for tight end Chris Herndon. The Vikings lost Irv Smith Jr. to injury before the regular season began, so former general manager traded the 2022 draft pick for a pass-catcher he believed would thrive in Minnesota’s offense.

Herndon did not thrive.

Regardless, Otomewo could reasonably tumble to the 5th or 6th Rounds, where the Vikings have four selections. The aforementioned Spielman adored stockpiling late-round draft picks, and perhaps the “plan” will pay off, allowing Kwesi Adofo-Mensah to land a hometown defender.

At the University of Minnesota, Otomewo played in 34 games, registering 81 total tackles and 7.5 sacks.

He majored in Business & Marketing Education and is from Indianapolis. Departing high school, Otomewo was classified by some draft scouts as the best EDGE rusher in the state of Indiana.

The Vikings employ Danielle Hunter and Za’Darius Smith as starting EDGE rushers but must add depth pass-rushers for the 2022 season.