The Viking Gods Should Team Up with a Greek God 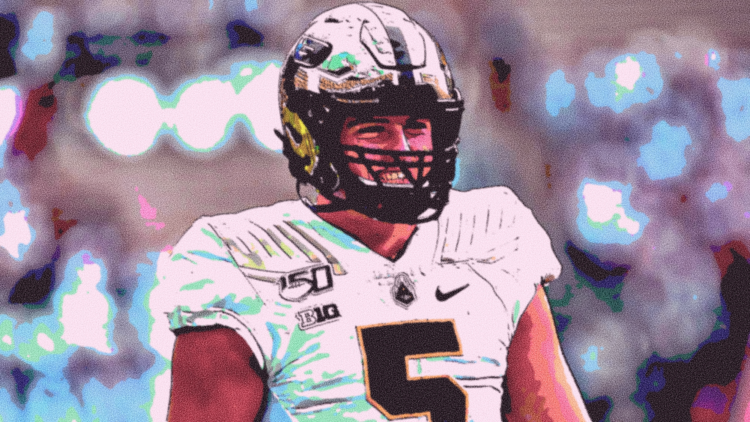 The Viking god Odin, the god of war and wisdom, and the god of roster building, Kwesi Adofo-Mensah, prepare for the draft held on April 28th. They are looking for superhuman abilities to help them in the battles of the upcoming 2022 season. Therefore, the Greek God of power rushing surfaced as a potential reinforcement.

His story is one of the most interesting ones in the draft. He was born Yoros Karlaftis in April of 2001 in Athens, Greece. His father, Matthew, was a multi-sport athlete in Greece and was a walk-on to the Miami Hurricanes’ track and field team as a javelin thrower. After earning his Bachelor’s degree in Civil Engineering, he pursued a doctorate at Purdue University, where he met George’s mom.

The civil engineering professor, Matthew Karlaftis, and his wife, Amy, lived in Greece until Matthew passed away in 2014. Amy and the four sons, who learned to speak English from their mom, moved to West Lafayette shortly afterward.

Yoros anglicized his name to George. He played football for West Lafayette High School and recorded 41 sacks during his career, and was named USA Today Defensive Player of the Year. He did not only play football but also won back-to-back state championships in shot put.

The highly touted four-star recruit had, among others, offers from Alabama, Clemson, and Ohio State. He committed to play football at Purdue, which was only about one mile away from his home.

Karlaftis played three seasons at Purdue. Despite the high level of competition, he dominated in his freshman year. The Greek recorded seven and a half sacks and remarkable 17 tackles for loss. Remarkable was not only his TFL numbers but also the number of snaps he played – 843. The sixth-highest amount of snaps of all defensive linemen in the country.

His sophomore season was not as successful as his freshman year. Purdue played only six games in the shortened pandemic season, while Karlaftis missed three games after testing positive.

In 2021, his junior campaign, he returned to dominance. The powerful rusher recorded ten tackles for loss and four and a half sacks, despite often facing double teams. His PFF grade was an outstanding 87.2, while his pass-rush grade was 90.6.

His two biggest skills are his power and his high motor. He can bull rush the biggest offensive tackles in college football, and he is even a problem for double teams. His speed to power pass rush is elite.

Karlaftis plays with high energy every play, making his high number of snaps even more impressive. He attacks the offensive tackle every single play. Therefore, reps to save energy can’t be found on his tape.

For a power rusher, he has good speed, agility, and bend. He regularly wins that way, but he is more impressive with the power rush.

The hand usage to disengage from the blocker in the run game stands out. That, paired with the motor, makes him a good run defender.

Another plus is his versatility. He can play as a true edge rusher outside of the tackle, as he did in college. However, he has the requisite power to play as a 3-4 defensive end as well.

His body and athleticism are NFL-ready. The measurements at the combine were 6’3″ ¾ and 266 pounds. Karlaftis did not run the 40-yard dash. However, the 38″ vertical jump and 121″ broad jump impressed scouts.

He must learn more counter moves to consistently win against top NFL offensive linemen, which is common for college pass rushers.

His arms are relatively short for an edge rusher, and he could be one inch taller. However, on tape against good competition, it has not been a problem.

He has to get more consistent against the run. He can be special against the run but occasionally has a bad snap, and the RB runs through his gap. Sometimes the motor can be a problem when he isn’t patient enough.

Karlaftis started the offseason as a sure top-ten pick, according to most draft outlets. Now, he is closer to coming off the board around pick 20. According to DraftKings, he is unlikely to be a top-ten pick, as the odds are +1500. If he is selected outside of the top ten, he will be a steal. He has shown to be a dominant player and did just turn 21. So, he still has a lot of room to grow.

Karlaftis has exceptional potential and will already have some ways to provide value early on as he continues to develop. As a three-year starter, he got better each season at Purdue, which should bode well for him unlocking himself further in the NFL. Karlaftis has the size, explosiveness and run-pass versatility to be one of the most disruptive players in the NFL in a few seasons.

The Vikings could get a starting 3-4 defensive end and rotational edge rusher to relieve the injury-prone rusher, Danielle Hunter and Za’Darius Smith. A front seven with a defensive line featuring Harrison Phillips, Dalvin Tomlinson, George Karlaftis, and the linebackers Eric Kendricks, Jordan Hicks, Danielle Hunter, and Za’Darius Smith would be a nightmare for opponents.