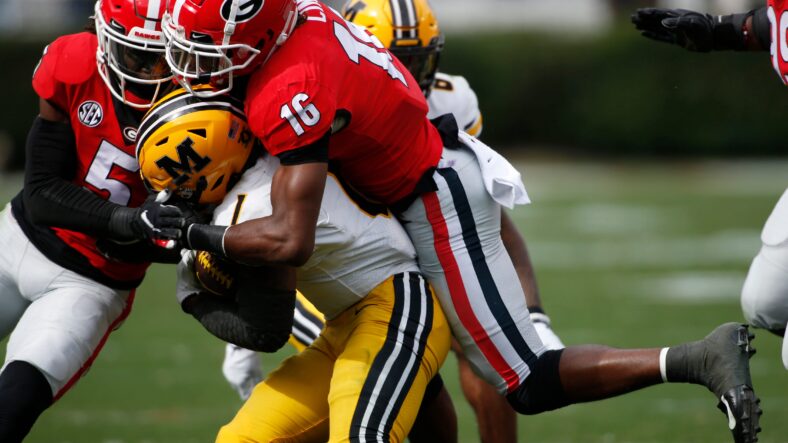 The 2022 NFL Draft kicked off Thursday night in dramatic fashion. A total of nine trades were made, including the Vikings, who traded away picks 12 and 46 for picks 32, 34, and 66.

Although giving up pick 46 in this exchange with the Lions seems like a head-scratcher, the Vikings still landed a great football player and now have three picks on day two.

Just because a chart says the Vikings got the short end of the stick in terms of value doesn’t mean they can’t make up for it with the players they select. They got off to a solid start with the 32nd overall pick, landing former Georgia safety Lewis Cine.

Cine is an absolute dog on the football field that will fly downhill and lay massive hits on opposing players. Although this is an extremely fun aspect of his game to watch, he’s also a great athlete with 4.37 speed that can make plays on the football on the back end.

It’s by no accident that Cine led the best college defense in 2021 with 73 total tackles and nine pass breakups. The Bulldogs defense was loaded with talent and had five total players selected in the first round, but Cine was the heartbeat for last year’s National Champions.

Defense has been an issue for the Vikings for the last two years, and they needed to find impact players on all three levels in this draft. They got off to a great start with the Cine selection, who figures to be the day one starter alongside Harrison Smith.

Now that the first round is in the past, the Vikings need to prepare for their selection at 34. The good news is that plenty of solid defensive players fell out of the first round, giving Kwesi Adofo-Mensah and his new regime a handful of options.

It feels as if the most likely situation for that pick will be snagging one of the top two cornerbacks still available. Both Clemson CB Andrew Booth and Washington CB Kyler Gordon should be on the Vikings’ radar Friday night.

Both players are top-five in terms of players still left ahead of day two, giving the Vikings a legitimate chance to blend need with the best player available.

It’s also possible that Adofo-Mensah and his staff fall in love with one of the pass rushers still available. The Vikings did figure out the Danielle Hunter situation and added Za’Darius Smith this offseason but adding another high-ceiling player at the position makes a lot of sense.

Two names on that front to keep an eye on are Michigan edge David Ojabo and Minnesota edge Boye Mafe. They’re both raw yet extremely athletic prospects that could learn behind two already proven players at the position.

If it weren’t for a torn Achilles at his pro day, Ojabo was penciled in by most as a top-15 pick. A player with that upside isn’t always available on the second night of the draft, so it certainly could be in play for the Vikings on Friday.

If one of the aforementioned picks doesn’t happen at 34, it’s entirely possible that the Vikings could look to pick up additional ammunition by trading back again. I know this isn’t what many fans want to hear, but picking up more value in the second and third rounds could be a solid play depending on how the board falls.

The Vikings defense needs a lot of work, and if Adofo-Mensah feels that there’s plenty of value left, a trade back wouldn’t surprise me. In an ideal world, the Vikings come out of Friday night with a starting-caliber cornerback and pass rusher, but it remains to be seen how the night will unfold.

One thing is for sure. It’s far too early for fans to be hitting the panic button on the new regime. Let’s get through another night of the draft before casting judgments on one trade that could still be a win for the Vikings long-term.