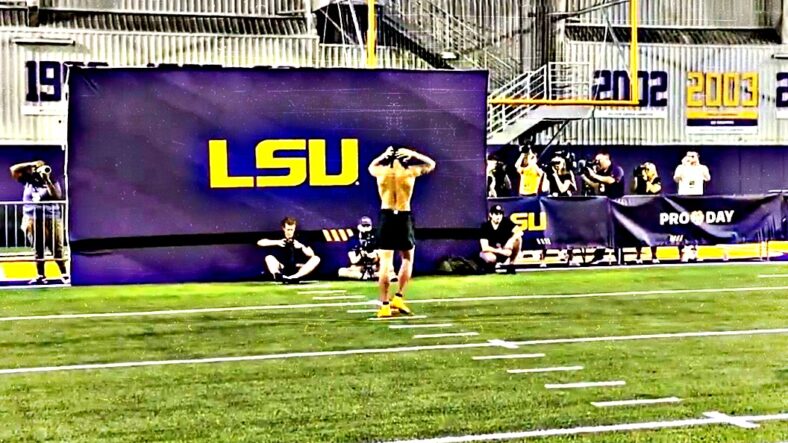 Today is LSU’s Pro Day, and as I feared, Derek Stingley Jr. is having a great day. His 40 yard dash time came in at a blazing 4.37 seconds. And this time is coming after foot surgery. Because of his performance, it might be time the Vikings look elsewhere for a cornerback.

I think it is safe to say that he is back.

Derek Stingley Jr. didn’t have a great year in 2020 (the last year he was fully healthy). However, that particular LSU defense was not very good. And, of course, his 2021 season was cut short by a foot injury. On the other hand, his freshman year was something special.

It should not surprise anyone if NFL scouts base their reports entirely on the 2019 season and his Pro Day performance. Based on some of the comments on Twitter, many experts are saying that his draft stock will rise. Benjamin Brown of PFF believes the betting markets will be changing after Stingley Jr.’s Pro Day.

What does this mean for the Vikings? Well, it is probably time for us fans to let go of our dream of drafting Derek Stingley Jr. or Ahmad ‘Sauce’ Gardner. Even if that dream is dead, there are still many positions of need that could be addressed.

What if Stingley Jr. and Gardner Are off the Board?

In my opinion, the Vikings should look to trade down in the draft if Stingley Jr. and Gardner are both off the board. There is still a chance that a good player like Kyle Hamilton will fall to them at 12, and it would be tempting to take him. However, there is nothing certain about Hamilton falling.

Although, there are still some quality cornerbacks that will be available later in the first round and early second round of the draft. There is a good chance that either Trent McDuffie or Andrew Booth Jr. will be available in the middle-to-late first round. The Vikings need a cornerback badly, and a good strategy could be trading back to the range of 17th to 2oth spots to get one.

Everyone knows the Vikings need a cornerback. There is no denying that. Sure, they have Patrick Peterson, but for how long? Then they have Cam Dantzler, who has shown some promise, but after that, there is not much for outside cornerbacks.

However, maybe the Vikings go a different route altogether? There is another positional need not on many people’s radars. That position? Wide receiver.

There is one guy who could be sitting there in the middle of the first round just waiting to be plucked up. That man is Jameson Williams out of Alabama.

If Williams did not tear his ACL in the national championship game, he would have been the first wide receiver off the board this year. The Vikings would be in a prime spot to snag one of, if not the best, wide receivers in this draft class. If the Vikings did draft him after trading back a few spots, it would be an absolute steal.

I know, wide receiver is not a glaring issue like cornerback, but it is still an area that needs to be addressed. Adam Thielen is 32 years old and is likely approaching the last couple of years of his playing career. The Vikings need to replace him at some point.

Why not draft his replacement now with a potential stud? Imagine Jameson Williams and Justin Jefferson scorching defensive backs for years. That is something to behold.