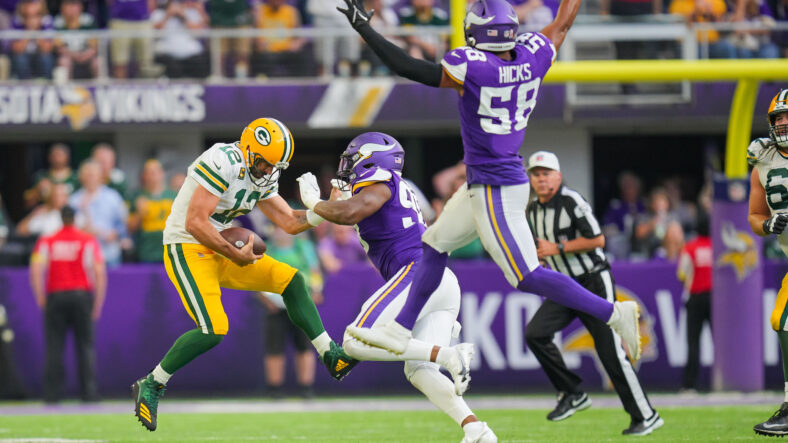 DJ Wonnum has done a pretty good job this season. The third-year edge rusher joined the Vikings in the 4th round of the 2020 draft. Since that time, he has often been a rotational player on defense, one who got elevated to a starter’s job when needed.

In 2022, Wonnum is the EDGE3 behind Danielle Hunter and Za’Darius Smith. It’s a role that allows him to benefit as a pass rusher since he often takes the field when Smith and Hunter are both still out there. He can then use the lesser amount of attention to create some pressure. He has 2 sacks, 4 QB hits, and 5 pressures this season.

In Week 4, DJ Wonnum played 42 snaps on defense. He had 6 tackles and 1 TFL. As you’ll see in the video below, he’s capable of setting the edge in run defense:

As you can see, Wonnum begins the play lined up along the outside shoulder of the tight end. The play begins and it soon becomes clear that Wonnum’s job is to ensure no one gets outside of him. On every play, there will be a player who must maintain contain.

The clip not only shows DJ Wonnum keeping his outside shoulder clean, it also shows him making the tackle.

Defensive players, especially up front, want to play with heavy hands. The hope is to get ones hands on the offensive player’s chest, knocking them back and off balance. It’s from that arms-extended position that a defender can then shed the block to go make a play. Wonnum shows good physicality, and at the 0:03 mark you can see him with his arm extended as he reads the play.

From that point, Wonnum can then shed his blocker as he goes in for the tackle. Jordan Hicks and Eric Kendricks are flowing aggressively to the ball carrier but they aren’t really needed.

The Chicago Bears are coming to town in Week 5. So far, Justin Fields has struggled in 2022. If I was calling plays for the sophomore, I’d likely begin by leaning on my run game to help move the sticks and further solidify the effectiveness of play action. David Montgomery – Chicago’s RB1 – missed Week 4, but he has done some good things this year. He had a 15-carry, 122-yard game against Green Bay in Week 2. Perhaps he’s capable of doing the same against Minnesota if he’s able to play.

DJ Wonnum will continue to be relied upon in Ed Donatell’s defense. He isn’t yet 25, so perhaps we’ll see him continue to improve as his career progresses. He has great length and plays with good effort. Some more plays like the one we’ve discussed in this piece will help him to play in the NFL for a long time.