This weekend the Minnesota Vikings are set to square off against the New York Jets on Sunday and they’ll again be without the services of their star left tackle Christian Darrisaw. He’s dealing with a concussion suffered two weeks ago, but Minnesota is taking a safe route when bringing him back.

There’s no denying that the Minnesota Vikings could use Christian Darrisaw sooner rather than later. All season the 2nd year player has looked like an All-Pro talent, and his ability to stymie the opposing pass rush has substantially benefited both Kirk Cousins and Dalvin Cook.

After suffering concussions in consecutive weeks however, it’s clear that head coach Kevin O’Connell is putting a priority on his brain and future health.

Last week the Vikings certainly could’ve used his help facing one of the best pass rushing teams in the NFL. Bill Belichick’s defense employs NFL sack leader Matthew Judon, and coming into that contest, it was questionable as to whether the Vikings could turn the page on a Dallas Cowboys game that saw Cousins on his back seven different times.

Thankfully, Blake Brandel and the rest of his teammates showed up in a big way allowing New England to sack Cousins just a single time.

Similar to the Patriots, New York employs a star pass rusher in the form of Quinnen Williams. The jets are very opportunistic on the turnover front, often using their pass rush to force poor throws from the opposing quarterback. Brandel will again be challenge, and Cousins needs to make decisions that keep the ball out of would be intercepting cornerbacks hands.

Maybe O’Connell and the Vikings see the Jets as an opponent they don’t need Darrisaw’s services for. Currently favored by three points according to online bookmaker Bovada, New York is probably a team a bit worse than their record would indicate.

This isn’t a scenario in which Minnesota can walk in assuming they’ll handle business, but Darrisaw’s absence can be overcome if the gameplan has been perfected during the long layoff.

There’s no denying that Minnesota has somewhat of an advantageous schedule down the stretch. Knowing that they’ll be a playoff team and are looking to win in February probably dictates some of their decision making, but the long term future of Darrisaw should also be a chief concern.

We’ve seen enough research at this point to know how impactful and important brain injuries can be to properly assess. Like Tua Tagovailoa earlier this season, concussions in succession are certainly a scary thing, and performance or otherwise, Minnesota must make sure Darrisaw is “all-systems-go” before he returns. 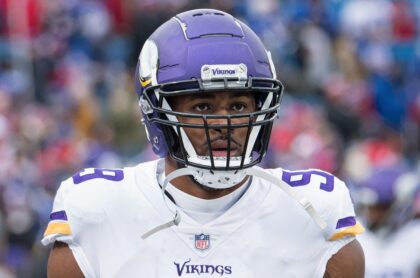