The star of the Minnesota Vikings defensive pass rush this season has been former Green Bay Packers star Za’Darius Smith. While he’s gotten plenty of the notoriety this season, longtime star Danielle Hunter has been healthy and is quietly making his way towards some new records.

Coming into the season there was plenty of talk regarding how good the Minnesota pass rush could be if they remain healthy. Both Za’Darius Smith and Danielle Hunter have been high level producers over the course of their careers.

The only knock on either has been in regard to their availability. Through 11 games, each has remained on the field, and now Hunter is starting to capitalize with a promising stretch run ahead.

Last season Hunter turned it on incredibly quick with six sacks in his first seven games. Unfortunately that’s where his season ended and there was no finality to what could have been. Needing 11 games to reach seven sacks this season, it’s been a slower burn, but Hunter does have four sacks in his past four games.

Obviously, this season represents another opportunity for Hunter to play 17 games for the first time in his career. Extrapolating his production, he is on pace to sack the quarterback just 10 times.

However, the recent boost while Smith draws additional coverage on the opposite edge has given Hunter an exciting opportunity to go on a run. Hunter’s career high is 14.5 sacks, which he tallied in both 2018 and 2019 being named an All-Pro and Pro Bowler both times. That’s a lofty goal to double his current output with just six games left, but it’s hardly out of the question.

Minnesota lines up with significant opportunity in terms of the competition Hunter will face as well. There’s some poor teams as a whole, and plenty of quarterbacks that take a significant amount of sacks the rest of the way. Divisional foes are all still on tap, and the familiarity should bode well in Hunter’s favor.

The greatest development this season for Hunter has been the clean bill of health. He’s an absolute menace up front and has saved a porous secondary for Ed Donatell. Getting through 17 games after missing substantial time a year ago would be such a huge boost.

Minnesota brought him back knowing it was a gamble if he could stay on the field, but so far everyone is benefitting, and it’s been a massive boost for a new scheme.

Here’s hoping Hunter can chase down some of his own sack records, but even if he can’t, 17 in the starts column would be a nice victory in and of itself. 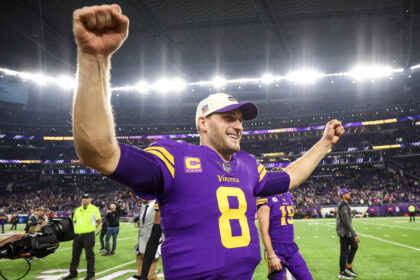 Also Read:
Did the Vikings Choose the Right Quarterback?