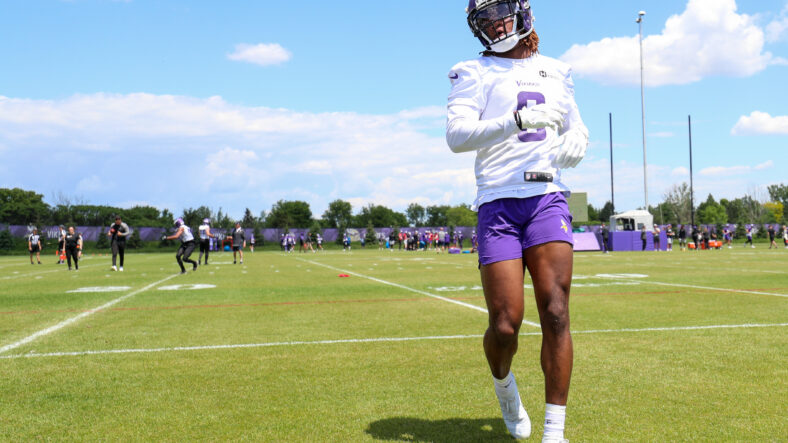 PFF’s Mike Renner unveiled his rankings of the NFL’s best secondaries. Unsurprising, he disagrees with Luke Kuechly, who drew a lot of attention when he chose the Vikings as his league-best secondary earlier in the offseason.

His reasons were the veteran leadership of safety Harrison Smith and cornerback Patrick Peterson. However, just leadership doesn’t win football games. The performance on the field also has to be on a high level. While Smith still plays on an elite level, Peterson’s play is declining, and he can be called ‘average’ in 2022.

Mike Renner ranks the Vikings secondary in a tier with the name ‘Ascending Units’ at position 18. It’s the third-highest possible tier. The elite defensive backfield from the prime of Mike Zimmer’s defense is long gone, but an ascending secondary after back-to-back disappointing seasons would be a good beginning for a better defense. Renner justified his ranking:

“The Vikings have quite a dichotomous mix of veteran talent with rookie top-50 picks. The biggest worry, though, is that age. Once considered elite players at their respective positions, can 33-year-old Harrison Smith and 32-year-old Patrick Peterson still be relied upon?”

Indeed, the Vikings have players in different stages in their careers. Peterson and Smith aren’t that far away from retiring. However, both are football savants and can play despite declining physical tools. Especially Smith, who is one year older than Peterson, still was one of the best safeties in football in 2021.

The franchise has to rely on young guys in the upcoming season. Cameron Dantzler will go into his third season. In the draft, general manager Kwesi Adofo-Mensah added the safety Lewis Cine in the first round and Andrew Booth Jr in the second. Both have the best possible mentors for their positions in place.

Interestingly, Renners named the starting unit with a surprising spot for one player. The starting safeties are Cine and Smith, as expected. Also, the outside cornerbacks aren’t a big surprise, Peterson and Dantzler. Booth, however, would be the slot cornerback, in his opinion.

The organization signed Chandon Sullivan from the Packers in free agency. He is the clear front runner to play in the slot. They also added Nate Hairston from the Broncos. He worked with defensive coordinator Ed Donatell in Denver and played mainly in the slot. The competition for that spot should be between the two free-agent additions, while Booth may have a shot to unseat one of the outside cornerbacks at some point.

The defensive backs are definitely one of the biggest concerns for the upcoming season. A lot depends on the development of the rookies and Dantzler, who did not get along with former head coach Mike Zimmer. He played well in his first two seasons, but it seemed like the two individuals had a private feud going, and the player can’t win that against a coach.

The ceiling for the secondary is high because of the infusion of young talent in the draft. However, the floor is low for the same reason.

Something that should also help the Vikings’ secondary ascend is the pass-rushing talent. Danielle Hunter and Za’Darius Smith are one of the elite duos in that regard. The concern about them is their durability, but opposing QBs are in for a tough time when they are on the field.

After one season as defensive coordinator at LSU, coach Daronte Jones is back at his old job coaching the Vikings’ defensive backs. He is just 43 years old, yet has already 20 years of coaching experience — important experience that should help the young players in their development.