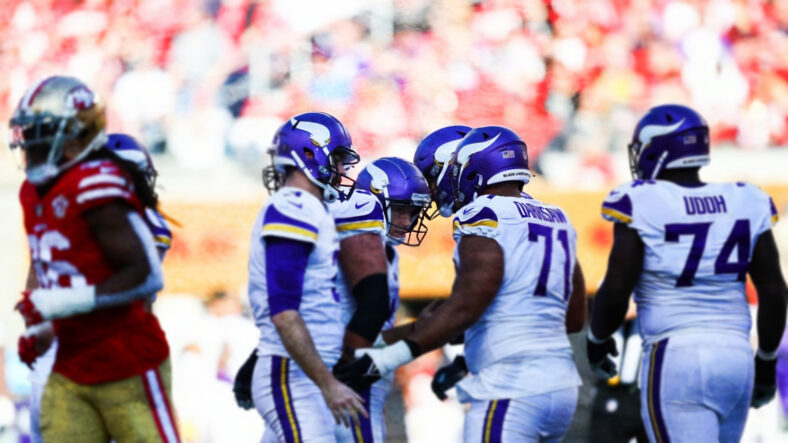 The 2022 Minnesota Vikings will find improvement at the team’s weak spots on the offensive line, evidenced by the litany of offseason moves maneuvered by new general manager Kwesi Adofo-Mensah.

Particularly, the right guard and center spots are the imminent concerns. The Vikings threw more solution-oriented darts at the board in the last couple of months than any other period in recent history.

FTNFantasy.com recently released its annual power rankings for offensive line by team, and the Vikings checked in at a familiar spot — the back of the pack. Dan Fornek from FTN Fantasy ranked Minnesota as the league’s ninth-worst offensive line, explaining, “Minnesota has a young offensive line that needs to take a step for them to have a chance to make a playoff run in a weak NFC.”

This offseason, Adofo-Mensah drafted Ed Ingram in the 2nd Round, a starting-caliber guard from LSU. And before that, he signed Jesse Davis from the Miami Dolphins and Chris Reed from the Indianapolis Colts. Both men have experience as starters — especially Davis — so measures are underway to remedy the Vikings trenches.

Specifically, Minnesota’s pass protection has been problematic for, well, almost a decade — since the departure of Steven Hutchinson and Bryant McKinnie. The pass-blocking from the Vikings offensive line ranks as follows in the last eight years, according to Pro Football Focus:

And such underwhelming rankings lead pundits like Fornek to declare that the Vikings “must get strong development across the board to break into that middle tier of offensive lines this season.”

The difference between now and the plans of yesteryear are the planners and the mere number of bodies auditioning for a resolution. Before 2022, the fix was generally acquiring a reservist player like Dakota Dozier or Mason Cole, crossing fingers with hope such players would alas blossom with the purple team.

That didn’t typically work out.

Thankfully for the Vikings sake, the run-blocking was never a problem with Mike Zimmer’s coaching staff, so the group isn’t wholly wayward.

Yet, until the Vikings offensive line starts providing pocket passer Kirk Cousins some time to throw the ball, the predictive consensus will be derived from many years of futility in the trenches.

Perhaps this is yet another reason why the Vikings ownership replaced Zimmer with offense-minded thinkers — to fix the offensive line once and for all.

The Philadelphia Eagles were ranked as the league’s top offensive line per FTN Fantasy. The Chicago Bears were pegged as the NFL’s worst.