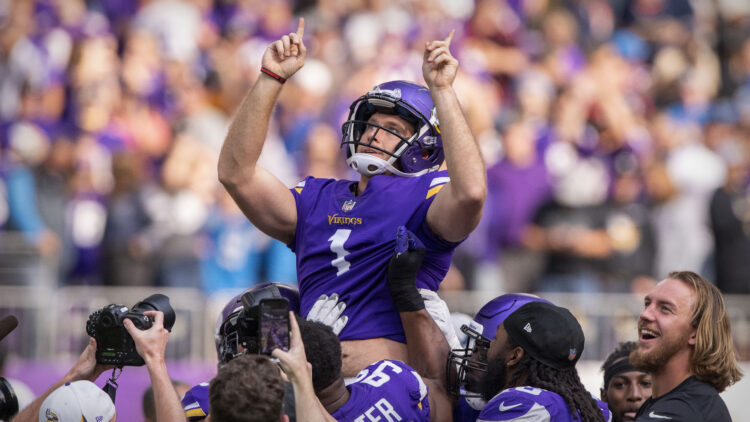 Greg Joseph was the Vikings’ kicker in the 2021 season. His contract was up but the organization re-signed him to a new one-year contract. However, they brought in competition for him after the draft when they signed Gabe Brkic, an undrafted rookie from the University of Oklahoma. Today, the team released Brkic.

Joseph missed a big kick at the start of last season. In Week 2, Joseph missed the last-second game-winning field goal from just 37-yards away. The Vikings ultimately lost 33-34 in a 0-2 start. Later in the same season, Joseph redeemed himself when he hit multiple game-winners for the Vikings. Against the division foes Detroit Lions, Joseph hit a 54-yard field goal to clinch the win. In Week 11, the 27-year-old beat another rival, the Green Bay Packers with one of his kicks.

Joseph hit 33 of 38 field-goal attempts, which equals 86.8%. He also hit 36 of 40 extra points. The Vikings went through a plethora of kickers that had worse numbers in recent years. His accuracy numbers might be about league average, but not a lot of kickers can hit deep kicks as well as he does. He only missed two of his nine attempts from more than 50 yards. Only three kickers had more.

His old and new team, the Vikings, added competition for him. Gabe Brkic was an All-Big-12 selection and a Lou Groza Award finalist. He also has a big leg, as he hit five kicks from more than 50 yards. However, his accuracy was a problem. He reportedly missed kicks in practice and that’s probably why the Vikings decided to cut him.

Usually, kicking competitions last a lot longer. This time, Greg Joseph won it rather quickly. Before he became the Vikings’ kicker, he bounced around and was on five different teams in just three seasons. The team could decide to bring in another kicker to compete with Joseph but after a solid 2021 season and beating out his competition, he certainly has earned the job.

Between the time Mike Zimmer was hired in 2014 and the signing of Greg Joseph in 2021, the Vikings ranked dead last in the NFL in extra point percentage with just 89.7% and only five teams had a worse field goal percentage than Minnesota with 81%.

Janik Eckardt is a football fan who has a fable for numbers and stats. He chose the Vikings as his favorite team, despite Christian Ponder being the quarterback at the time. He is a walking soccer encyclopedia, loves watching sitcoms, and Classic rock is his music genre of choice. Arguing about the Vikings on Twitter is one of his favorite things to do. Follow him on Twitter if you like the Vikings: @JanikEckardt