Vikings Had Big-Play Offense in 2021 — Plagued by Ruts 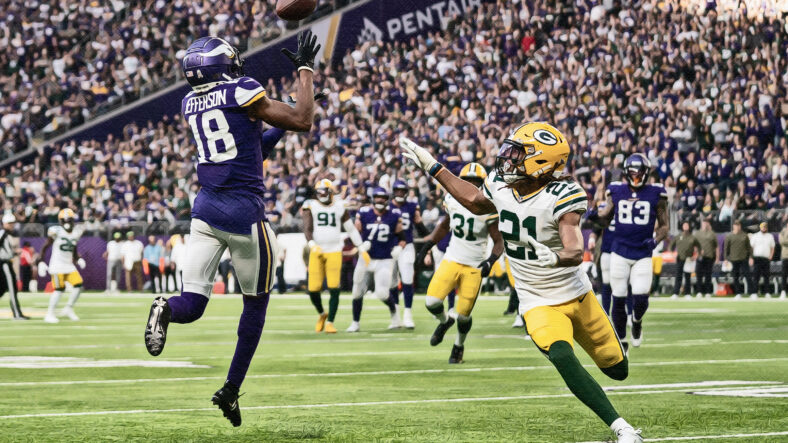 The Minnesota Vikings 2021 offense was a strange creature, showcasing all the firepower necessary to effectuate a playoff run but prone to inexplicable playcalling ruts.

The group was led by Kirk Cousins, who delivered 33 touchdowns to only seven interceptions, Justin Jefferson, Adam Thielen, Dalvin Cook, K.J. Osborn, and Tyler Conklin. In the trenches, Minnesota ranked 27th in pass protection per Pro Football Focus, so the Vikings offense was its usual blend of Tang and vinegar.

Consider these paradoxical stats from the Vikings 2021 offense:

If it felt like the Vikings offense was led by a first-time offensive coordinator, well, the statistical proof was in the pudding. The roster had enough to juice to exude some dazzling, this-should-be-a-playoff-team stats, but the undoing was stretches of playcalling futility.

No better example exists than the first stat mentioned above. Ask yourself — in a season without any real garbage time — how did the Vikings manage to thrive with big plays of 15+ yards but also succumb to the most 3-and-Outs?

A team should do both consistently. That is, if it flounders with big plays on offense, then the 3-and-Out stats would correspondingly struggle. But if the franchise can indeed push the ball downfield with 15+ yard plays, it should have no problem keeping drives alive. Plays gaining over 15+ yards inherently disqualify 3-and-Outs. Yet, somehow, the Vikings did both — jaunting down the field with big plays more than any other team but stalling on drives more so than any other team, too.

Thankfully, unless the dichotomy is in the players‘ DNA — which would be weird — Minnesota has a new coaching staff to potentially solve the ruts. When Kwesi Adofo-Mensah and Kevin O’Connell arrived in Minnesota, they had the opportunity to change the roster. They did not, instead keeping Cousins on the depth chart and re-tooling the personnel for a playoff push. Adofo-Mensah and O’Connell didn’t “keep things the same” on accident. It was a tactical decision to fine-tune a Vikings offense that already does many things proficiently.

A cessation of defensive meltdowns will also aid the enterprise. The Vikings ranked last in the NFL in points allowed in the final two minutes of halves.