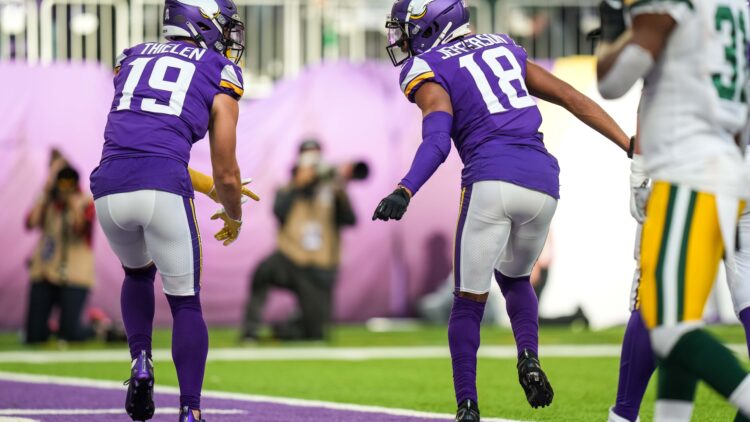 To have an elite duo on the offense is not a good sign for defenses. To account for one star is already a tough assignment, but paired with a second one, it’ll be even harder to defend. In recent history, Vikings fans were blessed with watching their nasty pair of receivers haunting defenses.

Before he was traded to Buffalo, Stefon Diggs and Adam Thielen were a dangerous combination. Both were interchangeable, as they could line up on either side and in the slot. Between 2016 and 2020, Diggs was seventh in receiving yards in the league, while Thielen was 12th.

The Vikings split up the tandem and sent Diggs to the Bills. Replacing Diggs was almost impossible, and the team didn’t sign any big-name free agents. However, former general manager Rick Spielman somehow instantly replaced him by drafting Justin Jefferson out of LSU. The Eagles passed on him for Jalen Reagor. Since then, Jefferson had an impressive start to his career.

Now the duo appeared on PFF’s list ‘Top five offensive and defensive duos ahead of the 2022 NFL season,’ written by Kambui Bomani.

The list uses PFF WAR (wins above replacement) and other PFF data. Bomani explained why the purple teammates made the list:

“Jefferson’s elite impact during his young NFL career has been undeniable. He’s garnered the Vikings’ best offensive grade his first two seasons while possessing the third-highest 2021 WAR figure among receivers (1.16). Thielen missed four games last year while finishing with his lowest receiving grade since 2015, but he is only two years removed from an 87.9 receiving grade. If the two wideouts can achieve excellence at the same time, their offensive impact can elevate the Vikings to playoff contention.”

The pairing is elite in the counting stats as well. In terms of receiving yards, their 4,667 yards only trail the Chiefs’ Travis Kelce and Tyreke Hill in the last two seasons. They don’t just catch the football but also find ways to score, as they are second in receiving touchdowns of any pair of receivers in the NFL as well. Only Davante Adams and Robert Tonyan of the NFC North rivals Green Bay Packers have one more touchdown in that span. Thielen and Jefferson lead both categories among wide receiver duos.

The other tandems on the list are the two Buccaneers, Mike Evans and Chris Godwin. Godwin comes from a torn ACL, but Tom Brady’s comeback after a short retirement will help them perform.

Davante Adams and Darren Waller find themselves on the list as well. The former Packers receiver is the all-time leader in receiving touchdowns against the Vikings, therefore, it’s a good thing that the Packers traded him into the AFC.

Vikings Also Have a Dangerous Trio

Besides Jefferson and Thielen, defenses have to account for Dalvin Cook. If the two pass catchers are double-teamed, Cook can take advantage of light boxes. He rushed for 4.7 yards per attempt in 2021, which is a good number. The impressive part is that this number came in a ‘down year’ for the running back. Per NFL Next Gen Stats, he managed to record 0.34 rush yards over expected per attempt. For comparison, Mattison had -0.44. Cook’s 0.81 yards over expected in 2020 ranked him close to the league’s best.

The team is expected to pass more than in recent years after the hire of Kevin O’Connell. Considering the elite WR duo, that’s not a bad idea. However, the presence of Cook in the backfield makes the offense even more explosive.