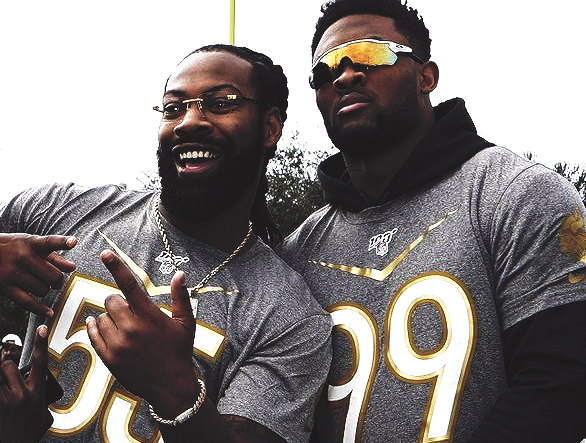 One of the most critical signings this offseason for the Vikings was Za’Darius Smith. He was an absolute menace when he played for the Packers. Pairing him with Danielle Hunter is a dream come true or a nightmare if you are a quarterback. The combination of Hunter and Smith and defensive tackles capable of eating up blocks really makes it feel like the Vikings’ defensive line is ready to feast.

It is fascinating to sit back and watch head coach Kevin O’Connell talk about the defensive line. His eyes light up thinking about all the possibilities. Most notably, during his press conference at the annual meeting, he spoke about being able to move Smith and Hunter around.

The idea of using Smith and Hunter as moveable pieces is the chess match within football. By moving them around, the Vikings could get creative with their fronts. The more creative the front, the more they can manipulate the protection the offensive line has to make.

This is music to the ears of Ed Donatell and Mike Pettine. Both of these guys love versatility along the defensive line. The reason for this is simple. You keep the offense guessing throughout the game. It is also easier to hide tendencies, something the Vikings struggled to do the last two years.

Vikings Want to Be Multiple

The more you listen to the Vikings’ new coaching staff, the more you hear the word “multiple.” What exactly do the coaches mean by this? They mean they don’t want to line up their defensive line in a four-man front. Nor do they want to play basic coverages.

Instead, they want to change their look week to week depending on their opponent. This gives the Vikings a distinct advantage over their opponents. For starters, it is more difficult for teams to scout the defense. The opponent can only prepare for what they have seen on tape.

If you come out with a different scheme than what you have put on tape, the opponent needs to make in-game adjustments. Of course, all teams in the NFL try to do this. The Vikings are not unique in this case. However, the Vikings have something some teams don’t — two All-Pro edge rushers.

Everything Revolves Around Smith and Hunter

I would bet that the entire defensive scheme will be designed around Smith and Hunter. Sure, there will be times when it is all about stopping the run, and you have a few big boys on the field. However, the goal of any NFL defensive is to create 3rd down and 7+ yards.

A 3rd down and 7+ seems to be the magic number. If your defense can get an offense to this point, 99 out of 100 times, the offense will pass the ball. This is perfect when you have two all-pro edge rushers.

Now that you know the offense is passing, you get to manipulate the protections. With Za’Darius Smith and Danielle Hunter’s ability, you can line them up wherever you want to. The Green Bay Packers, under Mike Pettine, even had a play called “Z Green Bay,” which essentially meant “Za’Darius, pick a spot and wreck the play.”

With Mike Pettine in the building, this play is going to make a comeback. However, he has Smith and Hunter to do this with. The Vikings should easily be able to create scenarios that get either of them one on one with a tackle, guard, or tight end.

If Smith or Hunter are one on one, you better bet that something good will happen.