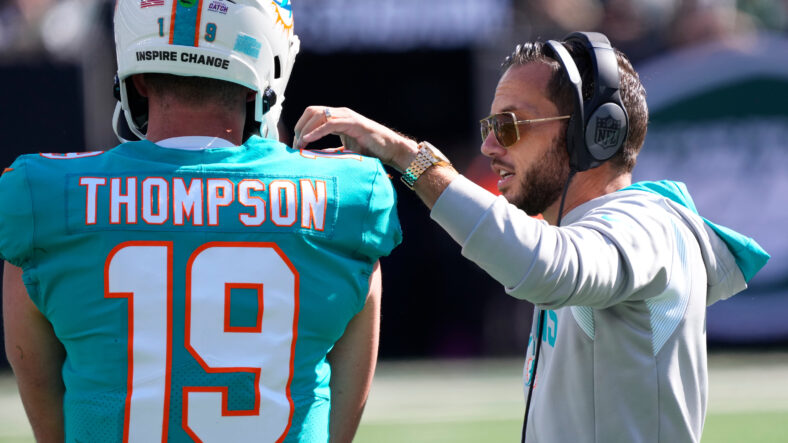 With both Tua Tagovailoa and Teddy Bridgewater still recovering from concussions over the past couple weeks, the Minnesota Vikings may be set to face a rookie QB making his first career start. That rookie QB is Skylar Thompson, who the Miami Dolphins selected in the seventh round of the 2022 NFL Draft out of Kansas State.

Last week was a rough go of things for the rookie against the New York Jets, but it didn’t quite do the rookie justice for some of his skill set as a QB. While the Vikings prepare to potentially face a rookie QB, here are three things that Thompson can do well as a QB.

He Can Hit Deep Throws

Of the quarterbacks taken in the 2022 NFL Draft, few of them had the arm strength that Thompson possesses. Throughout his collegiate career, the Kansas State product frequently uncorked deep balls to his wide receivers. He averaged 9 yards per pass attempt during the 2021 season and 8 yards per attempt over the course of his career.

Against the Vikings, we should continue to expect to see him let a few deep balls loose throughout the day with receivers like Tyreek Hill and Jaylen Waddle at his disposal. He actually did it a couple times last week against the Jets as well.

The rookie didn’t get to showcase his mobility for actual rushing yards this week against the Jets, but Thompson is a sneaky athletic player despite his 6’2, 225-pound frame. Over the course of his collegiate career, he rushed for 1087 yards and 26 TDs as a Wildcat. This included 405 yards and 11 TDs during the 2019 season.

We did get to see some subtle movements from Thompson on Sunday, though. He had to move around the pocket a ton with how much the Jets pass-rush kept getting home after Terron Armstead left the game. Here’s an excellent scramble on third down to keep a play alive and find his open receiver, Waddle.

Given how Justin Fields found a rhythm in the second half against Minnesota last week, the Vikings must do a better job at containing Thompson this week. Unlike Chicago, Miami has an uber-talented group of receivers, so allowing him to find extra room to throw could be a death sentence.

Thompson turned the ball over twice against the New York Jets this weekend, but throughout his career, Thompson has typically done a good job of taking care of the ball. In fact, his protection probably takes at least some of the blame on his one interception of the day. As he’s releasing the ball, he gets hit, forcing the ball to leave his hand erratically., and it goes right to Sauce Gardner.

As for the fumble, the rookie just has to do a better job of taking care of the ball.

There were a couple instances where Thompson seemed to get lucky with his passes too. Here’s one that just barely fits into a window, avoiding a pick-six.

That said, the rookie looked very confident, going through his reads and firing the ball with confidence more often than he didn’t.

Minnesota also has to keep an eye out for some trickery this week.

Overall, the Vikings gameplan in this one should be simple: play clean in the secondary and put constant pressure on Thompson. The rookie found his speedy receivers deep on multiple occasions to draw DPI penalties, and if the Vikings aren’t careful, these penalties could pile up against them as well.

If Minnesota makes Thompson feel pressure early and often, they should win this game fairly easily, though. Don’t give the rookie enough time to throw where he feels comfortable in the pocket, and perhaps they’ll find themselves with a few errant passes throughout the afternoon.