The Vikings Are Undefeated Against Super Bowl QBs in 2022 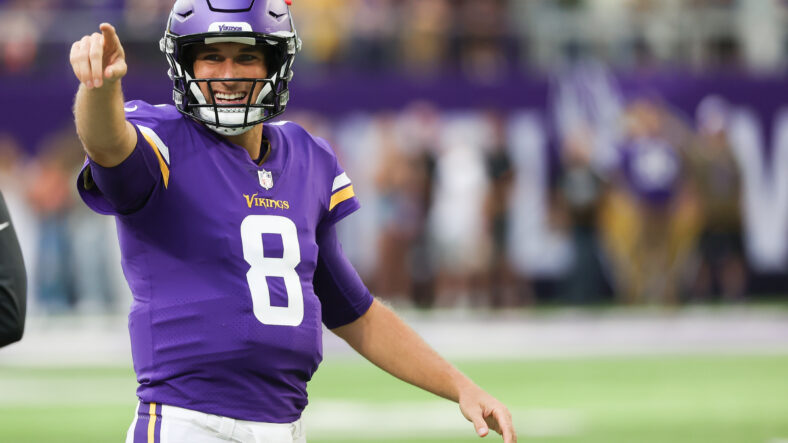 Normally, when a team goes up against a QB that has played in a Super Bowl, it means they are in for a rough night. As for Kirk Cousins and the Vikings in 2022 though, they barely consider it to be a challenge.

After completing a double-digit comeback (twice) against Jared Goff and the Detroit Lions, the Minnesota Vikings have moved to 2-0 when playing against teams that feature quarterbacks who have appeared in Super Bowls. Their first win obviously came in Week 1 against Aaron Rodgers and the Green Bay Packers when the Vikings torched Green Bay’s defense, 23-7.

Rodgers took the Green Bay Packers to a Super Bowl XLV victory over the Pittsburgh Steelers, winning 31-25. The Packers QB completed 24-of-39 passes for 304 yards and 3 TDs in the win on February 6th, 2011.

Green Bay has not been back to the Super Bowl since, despite appearing in four NFC championship games.

Nearly a decade later, Goff helped the Los Angeles Rams make Super Bowl LIII where the Rams lost to Tom Brady and the New England Patriots, 13-3. Goff struggled throughout the game against a stout New England defense. He completed 19-of-38 passes for 229 yards, no touchdowns, and an interception.

Since this appearance, the Rams made their blockbuster trade to move their first overall pick from the 2016 draft to the Detroit Lions. In return, Los Angeles acquired Matthew Stafford, and he helped them win Super Bowl LVI over the Cincinnati Bengals, 23-20. In that game, Stafford completed 26-of-40 passes for 283 yards, 3 TDs, and 2 INTs.

Moving through the rest of the 2022 season, there is a possibility that the Vikings have either two or three more meetings with Super Bowl QBs on their schedule. Of course, they have their New Year’s Day matchup with the Green Bay Packers in Lambeau Field.

Assuming Rodgers remains healthy, he will play in that game, and I’ve already predicted that this game will be the deciding factor in the NFC North race.

The other potential matchups include games against Matt Ryan and the Indianapolis Colts and Joe Flacco and the New York Jets.

The Flacco matchup is murky at the moment as it depends on Zach Wilson’s health. He suffered a sprained PCL and a bone bruise on his knee during the preseason and has not appeared in a regular season game yet this season. In his stead, Flacco has been starting for the Jets.

Assuming Wilson is healthy for the Week 13 matchup, the Vikings will see him rather than Flacco. The game against the Colts comes in Week 15. Hopefully Minnesota’s success against these former Super Bowl QBs continues as they pursue their first trip to the Big Game since 1976.