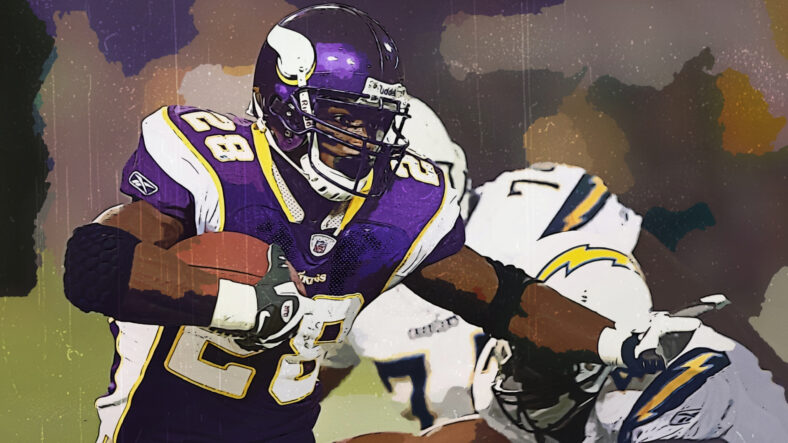 While the Minnesota Vikings are known as a “defensive franchise” thanks to the bravado of the Purple People Eaters in the 1960s and 1970s, purple rookies on offense truly take the cake for first-year performance.

Six Vikings players have won Rookie of the Year since 1961, and all of them played offense. It’s quite odd, and Vikings enthusiasts have no qualms with the offense-driven heaviness.

These are the Top 5 rookie seasons in Vikings history in ascending order.

The Numbers:
Rookie of the Year
2,081 All-Purpose Yards
8 TDs

Harvin joined the Vikings at the perfect time, becoming a Viking a few months before Brett Favre signed on the dotted line. He and Favre clicked immediately, and the Vikings almost made a storybook run to the Super Bowl.

The Vikings didn’t keep Harvin for long, but his skillset was Deebo Samuel-ish when Samuel was still in middle school. Harvin would thrive in today’s NFL. Hell, he’s only 34 and should still be playing.

Thanks to Harvin and his pal Adrian Peterson, the Vikings navigated life after Favre with some excitement on offense.

The Numbers:
Rookie of the Year
1,163 Yards from Scrimmage
6 TDs

The Spin Doctor is another player, like Harvin, who would thrive in 2022. He ran the ball like a bellcow RB1 and caught passes like a WR, a tendency the Vikings might emulate this season with Dalvin Cook.

Foreman joined the NFL in 1973 and immediately raced to five straight Pro Bowls. In 1975, he caught 73 passes from Fran Tarkenton and even nibbled at MVP contention during the prime of his career.

The Miami alumnus is still a die-hard Vikings fan and is active on Vikings social media.

Jefferson had a strong case for #2 on this list, as he set the NFL record for most receiving yards by a rookie in a single season. Unfortunately for him, his pal and LSU teammate Ja’Marr Chase outdid him for the metric one year later.

The Vikings wideout instantly climbed the league’s WR pecking order, nominated by most as a Top 3 wide receiver in the NFL heading into 2022. And, he’s only 23 years old.

Jefferson has tabulated more receiving yards than anyone in human history before the age of 23. He’ll get a chance to prolong his success with an offense-first coach, Kevin O’Connell, this September.

The Numbers:
Rookie of the Year
1,609 Yards from Scrimmage
13 TDs

Even though the Vikings employed a fabulous running back in Chester Taylor during the 2007 offseason, they drafted Peterson anyway.

The decision was wise.

Taylor immediately resorted to RB2 as Peterson took the NFL by storm, shattering the single-game record for rushing yards (296) in his first season. The record stands today. Peterson also made the team his own for arguably seven seasons, keeping the Vikings afloat during an era of quarterback topsy-turvyness.

The Numbers:
Rookie of the Year
1,313 Receiving Yards
17 TDs

Moss had the best Vikings rookie season ever and perhaps the best rookie season in the sport, period. His acrobatic and gymnastic style of catching the football at the time was unprecedented and hasn’t really been rivaled since.

Just like Peterson, but nine years earlier, Moss seized the Vikings and made them his team.

No WR has topped his 17 receiving touchdowns as a rookie. And that’s even in a pass-happy league of which the NFL has embraced over the last decade. His 1,313 receiving-yards mark in a rookie campaign fell thanks to Odell Beckham and the aforementioned Jefferson, but the 17 touchdowns are unblemished.