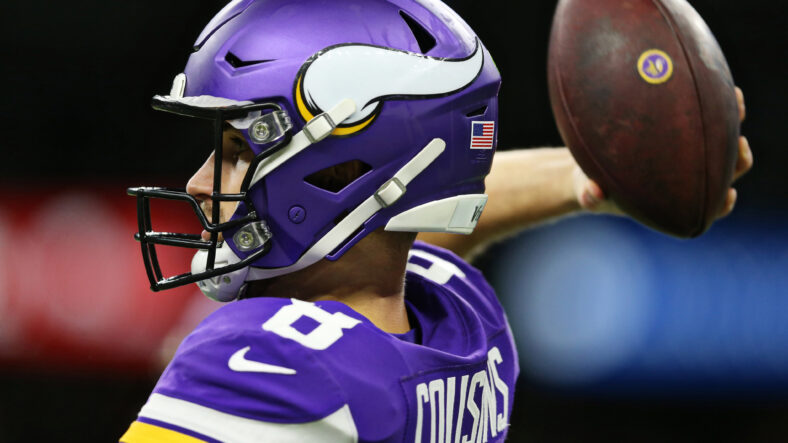 Over the offseason, rumors abounded surrounding the Minnesota Vikings. They obviously fired both GM Rick Spielman and head coach Mike Zimmer after going 8-9 during the 2021 season. However, the biggest rumor had to do with their veteran QB Kirk Cousins. Would the Vikings trade him? Might they extend him? Or were they content to ride into 2022 with him set to hit free agency following the season?

The Vikings QB was just one of many quarterbacks involved in trade talks as part of what was possibly the busiest offseason in NFL history. However, Cousins carried the caveat of a ridiculously high cap hit while not necessarily being an elite QB.

Cousins went into the offseason with a $45 million cap hit for the 2022 season, and many spent the winter months trying to predict whether the Vikings would extend or trade the QB. Getting rid of him made sense to reset under the new GM/head coach regime of Kwesi Adofo-Mensah and Kevin O’Connell.

As the rumors progressed, the Panthers emerged as a potential trade partner after Sam Darnold’s first year as the starter did not pan out. Over 12 games, Darnold threw for 2527 yards, 9 TDs, and 13 INTs. Carolina also started Cam Newton and P.J. Walker, and the trio led Carolina to a combined 5-12.

Because of these struggles between three QBs that couldn’t win games or stay healthy, it made sense that Cousins would potentially be connected to that team. Cousins is a strong QB when the situation around him is ideal. If he were on a team with Christian McCaffrey and DJ Moore, it seems safe to say the Panthers would be a fairly competitive team.

Even so, when the Panthers were connected to Cousins, the front office apparently laughed off the report. Again, they employed Sam Darnold at the time and laughed off the proposition of taking on a QB that passed for 4221 yards, 33 TDs, and 7 INTs and had four game-winning drives.

Since then, things haven’t exactly gone well for the Panthers at QB, or in any regard, really, while the Vikings haven’t had a start to a season like this since 2016.

A few months after this report, the Panthers made a trade to take on Baker Mayfield from the Cleveland Browns following Cleveland’s controversial trade and extension given to Deshaun Watson. They also selected Matt Corral out of Ole Miss in the third round of the 2022 NFL Draft.

So far into the 2022 season, the Panthers are 1-4, fired head coach Matt Rhule, and have listed Baker Mayfield as doubtful for this weekend against the Los Angeles Rams.

Meanwhile, the Vikings found a way to agree with Cousins on a contract extension, lowering his cap hit. Through five games, the returns are terrific as Minnesota is 4-1, their best record through five games since 2016, and Cousins has led game-winning drives in three consecutive games.

Of course, overall, this has been a bit of a down year for Cousins. He’s completing 66.2% of his passes, which is about normal, but 1327 yards, 7 TDs, and 5 INTs are pretty far off what he normally does. That said, it’s still better than what Mayfield has done through five games by a wide margin. Mayfield has completed 54.9% of his passes for 962 yards, 4 TDs, and 4 INTs.

Hindsight is 20/20, but knowing what we know now, it seems safe to say that the Panthers would have taken that Cousins trade if the Vikings offered it.