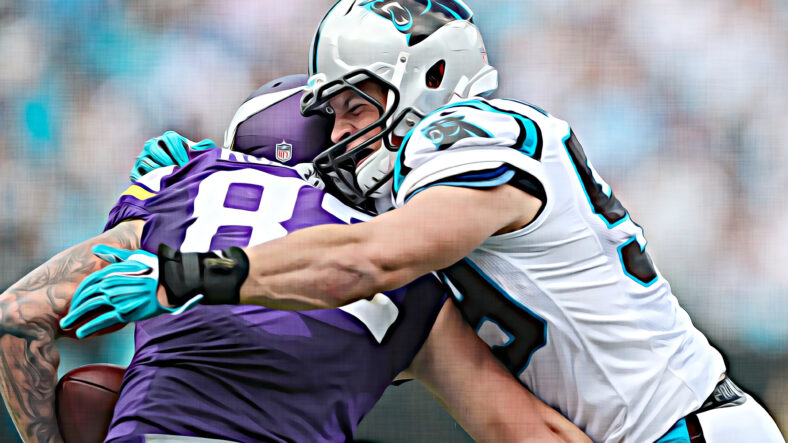 A week and a half ago, former All-Pro linebacker Luke Kuechly joined ESPN’s Sportscenter to offer some insights on the 2022 NFL offseason.

Kuechly was asked about the best secondary in the league, and out of nowhere, he nominated the Minnesota Vikings, “I’m going to go with the Vikings. Harrison Smith, Patrick Peterson, two young rookies — Lewis Cine out of Georgia, and they drafted [Andrew] Booth out of Clemson.”

The name-drop by Kuechly was surprising because, in March, Minnesota’s secondary seemed suspect, headlined only by Harrison Smith and Cameron Dantzler. But then general manager Kwesi Adofo-Mensah re-signed Patrick Peterson, added Chandon Sullivan at cornerback, and then drafted Cine and Booth, as mentioned by Kuechly.

Of course, the video clip made the rounds in the Vikings digital community because Kuechly isn’t a pea-brained spitter of falsehoods. The man knows his stuff and really had no preordained reason to announce Minnesota as his pick.

Alas, he did choose the Vikings, and perhaps the team’s secondary isn’t as skimpy as once believed.

And here’s the irony — the Vikings spend very few dollars on the 2022 secondary. Compared to the rest of teams leaguewide, Minnesota allocates the third-fewest cap dollars to its secondary with $23.7 million. Only the Atlanta Falcons and New York Giants invest less. Per Spotrac.com, here’s the breakdown:

The Vikings scrape Top 10 categories in the league at quarterback and running back for spending but somehow “make up for it” with a value-based approach with safeties and cornerbacks.

Here’s the full secondary as of May 20th.

And the affordability checks out as Harrison Smith is the only defender inside Minnesota’s secondary earning megabucks.

Overall, if the Vikings bring Kuechly’s hypothesis to life and morph into one of the NFL’s top secondaries, they’ll do it on a teensy budget.

Additionally, that bodes well for the future because Dantzler, Booth, Cine, and Bynum are all under the age of 24.