The Case for Kirk Cousins Playing Out his Contract 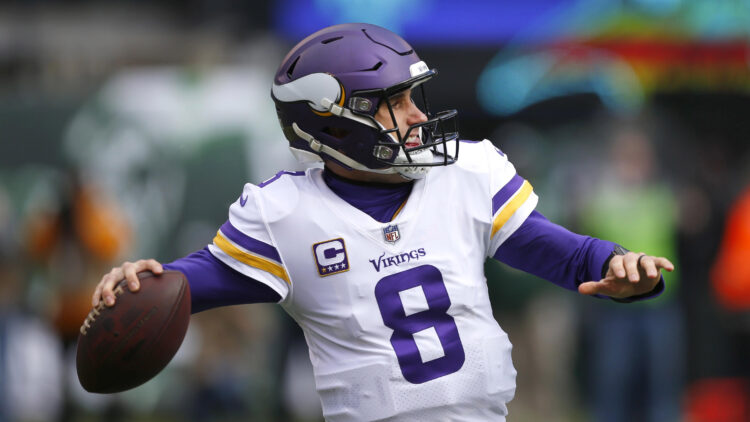 What to do with Kirk Cousins?

That seems to have been the discourse amongst Vikings fans for eternity. Unsurprisingly, in the last year of his contract and with a new general manager and head coach in town, the debate is rumbling more ferociously than ever with the two extremes of the argument — the “Kirk stans” and the “anti Kirks‘ are arguing vehemently for an extension or a trade. The rest of us are somewhere in between.

They are seen as the only two options by most as Cousins’ $45 million cap hit is seen as untenable. However, there is a third option. Kirk Cousins plays out his contract.

If an extension can’t be agreed upon and a trade partner can’t be found, there is no other option. The Vikings would still be on the hook for the full $45 million cap hit if they cut Cousins from the roster. Seeing out the season could work for both parties.

There are no guarantees that another team will come calling for Cousins.  If a team gets desperate for a new quarterback and a big trade offer does come in, then there is a decision to be made. It has to be a deal with significant value, though. Furthermore, there has been nothing to indicate that Cousins is interested in coming to the table for an extension. Cousins may have said he wants to retire a Viking. The cynic in me see’s that as little more than paying lip service to his current employer and fanbase. It’s unlikely he will take the “team friendly” deal that many fans are pining for. Kirk Cousins will and absolutely should do what’s best for Kirk Cousins and his family.

If no trade is forthcoming, seeing out his contract and testing the water in next year’s free agency makes perfect sense for Cousins rather than agreeing to a pay cut. So, the Vikings could find themselves in a situation where they have no choice. I know that a $45 million cap hit is a giant pill to swallow, but there are other ways to free up cap space. Other highly-paid veterans, who, unlike Cousins, have multiple years left on their contracts. The possibility for restructuring contracts is there for several players — Danielle Hunter in particular.

Suppose you give Kirk Cousins a contract extension. It likely means you are just pushing the problem season with the huge cap hit down the road. We’d just end up here again but with an older Kirk Cousins with an even bigger cap hit than this year’s $45 million in all likelihood. If you can get Kirk to sign a short extension which the team can get out of cheaply after a year or two, that would be awesome, but I don’t see anything in that for Cousins. With the increase in cap and ever-increasing quarterback contracts — Derek Carr is reportedly looking for $40 million a year. Whether you like it or not, Kirk Cousins has been paid accordingly by the Minnesota Vikings.

Seeing Out the Contract

The advantage of letting Kirk Cousins play out his contract is O’Connell gets a good experienced quarterback for his first season. We get to see if a supportive offensive-minded head coach can take Kirk Cousins to the next level. before committing to more years and more money. Of course, if Cousins has a great season, you run the risk of him hitting free agency in 2023, assuming all the key offensive weapons are kept on the team.

With Cousins at quarterback, we should stay around the .500 mark at least. Fans might be baying for a clean slate, but Kevin O’Connell doesn’t want to come in on his first season as a head coach and win just three games. Fans don’t have the patience they think they have for that sort of thing either.

It’s the time of year when it’s hard to know what to believe, but Kevin O’Connell looked to me like a guy who thinks he can get the best out of Kirk Cousins. There aren’t many quarterbacks who are undoubtedly better than the Vikings quarterback. Everyone will have their own opinion on where he ranks, but there are probably only maybe six or seven quarterbacks who would be considered unanimously better than him.

Perhaps the young offensive mind willing to set the team up around Kirk’s strengths can finally get him to that next level. Maybe it will be more of the same. There is definitely a case for it being worth finding out and doing so without putting yourselves on the hook for several more years of guaranteed big money.

Another advantage is O’Connell, and his staff gets a year to assess Kellen Mond and decide if he has what it takes to be the Vikings next quarterback. The third-round pick always felt like a Rick Spielman pick who Mike Zimmer never wanted to me. I’m sure Zimmer would have preferred an extra defender on his roster rather than a rookie quarterback he had no intention of playing in a make-or-break season for the former head coach.

It should be a more friendly environment for the former Aggies quarterback to develop. If he doesn’t show enough to the new coaching staff, then the Vikings can look to draft a quarterback in the 2023 draft, leaving them able to address the problematic defense this year. If the front office can work deals to keep Harrison Smith, Eric Kendricks, Danielle Hunter, Dalvin Tomlinson, and Michael Pierce around, then bring back Anthony Barr and Patrick Peterson, there would be a good defensive backbone for the scheme new defensive coordinator Ed Donatell to implement.

The problems for the Vikings to address would then be a weak secondary and a need for outside linebackers and depth in general. How well the season goes could depend on the strength of the new regime’s draft.

There’s a lot of work for the front office and coaching staff. Rolling with Cousins for one more year can work.