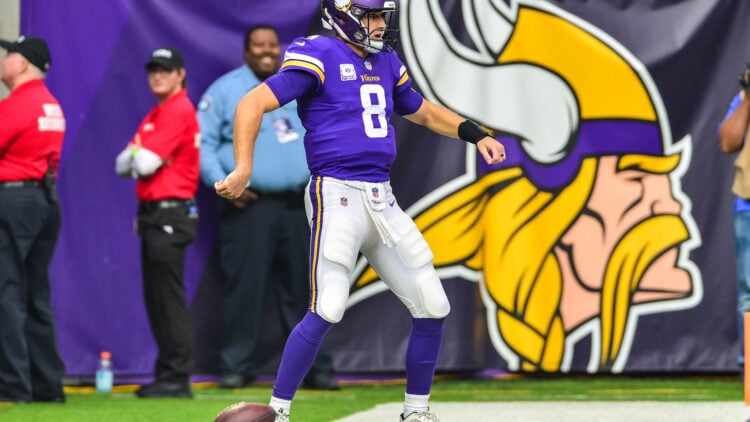 The first two major questions of the Vikings offseason have been answered, with the appointments of Kwesi Adofo-Mensah as general manager, followed by the impending appointment of Kevin O’Connell as head coach once he’s finished coaching in Super Bowl LVI with the Los Angeles Rams.

The third major question is the future of quarterback Kirk Cousins. I have the feeling there is a desire to move on from Cousins, rightly or wrongly. That comes from the very top. Maybe I’m barking up the wrong tree, but if I’m not, what are the possible Kirk Cousins trade destinations?

In my opinion, there are currently four most likely Kirk Cousins trade destinations.

The Denver Broncos have to get themselves a quarterback — again. And they need to get a serious one in an AFC West competing against Patrick Mahomes, Justin Herbert, and even Derek Carr the Broncos. If they do that, they should have a team to compete in that division. Is Cousins the answer? He might not be the first name on their list, as they probably have hopeful eyes set on Aaron Rodgers and Russell Wilson. If those men stay put again or head to a different destination, then Cousins could be in play for Denver.

They have the cap space to make it happen with $40 million available, according to Spotrac, and lots of room in the next two years to sign him to a multi-year contract. If the Vikings front office makes this deal, I want that ninth overall pick. Maybe that would involve eating up more of Cousins’ contract or some late-round pick swapping. Whatever it takes, that ninth pick is what makes it worthwhile for me. Maybe a deal gets done for the Broncos 2nd and 3rd round picks, which would be palatable.

Another team (once again) in the quarterback hunt is the Carolina Panthers.

Teddy Bridgewater only lasted one season, so could Sam Darnold face the same fate? The Panthers sent 2nd and 4th round picks to the New York Jets for Darnold. They ended up bringing back Cam Newton after a good start with Darnold under center quickly turned sour. After their 6th overall pick this year, they don’t pick again until 105. The retirement of Tom Brady and Sean Peyton leaving the New Orleans Saints, plus the Atlanta Falcons not being in good shape, leaves the door ajar for Carolina in the NFC South.

They don’t have the immediate cap space for Cousins, but they have room to maneuver — particularly if they can offload Darnold somewhere. However, the disappointing end to his year in Carolina makes that more difficult. The Panthers lack of draft capital makes things interesting.

Would they be willing to trade the 6th overall pick? Would the Vikings be willing to send a day 2 pick the other way? Of course, 2023 and beyond picks can be used, or they can try and trade back from six first and then approach the Vikings. The openness of the NFC South makes this one intriguing. Kirk Cousins gives the Panthers a better chance of walking through that door of opportunity than Newton, Darnold, or any of this year’s rookies. This one might need some thinking outside the box to happen.

A reunion with former long-time Vikings coach and Kirk Cousins quarterbacks coach and offensive coordinator in Minnesota has been top of the rumor tree.

Kevin Stefanski’s Cleveland Browns looked poised for a serious run this season after a first winning season and a first playoff win in a long time. The AFC North is a tough division, even more so with the emergence of the Super Bowl-bound Cincinnati Bengals. The margins between success and failure are small, and the Browns have a decision to make with Baker Mayfield. The former first overall pick is heading into his fifth year, where his earnings jump from $10 million to $18 million. Signing him to a new contract would likely cost the Browns considerably more.

The question they have to ask is whether Mayfield has shown he is worth that investment?

Then on the flip side, is Kirk Cousins the significant upgrade they need? Coach Stefanski should know Cousins well enough to make that decision. The question is, does Mayfield come the other way? That’s not a prospect that excites me. The only reason to trade Cousins, in my opinion, is to get significant cap space to rebuild the defense. That doesn’t happen with Mayfield coming to the Vikings. A Kirk Cousins restructure would be a better option, so I only trade for draft capital.

The retirement of long-time quarterback and probably future hall of gamer Ben Roethlisberger has left the Pittsburgh Steelers needing a quarterback.

On the books currently, they have Mason Rudolph and Dwayne Haskins, neither of which should be in consideration for starting next season. The Steelers have a good solid all-around team under a great coach in Mike Tomlin — so good that they managed to make the playoffs this season with the shell of Ben Roethlisberger, who should have retired a year earlier. This is what makes the Steelers an intriguing fit for Cousins. A quarterback of his caliber would have every chance of success dropping into that team.

They may look to draft a quarterback, but none of this year’s options scream immediate starter for a team wanting to compete. Sitting at 20 in the draft, the better option may already be gone. I don’t see an option worth trading up for. If one is on the board at 20, then you can take one to develop while signing a veteran to stay relevant in the immediate future.

The Steelers don’t have bad years of rebuilding. They are a franchise that stays relevant. Cousins can help them do that, even if you think he’s just a .500 guy, that will keep you in the mix in the brutal AFC North. Of course, there may or may not be other options like Rodgers or Wilson, but Cousins should be on their shortlist.