The Anchor Spot of Vikings OL Very Much Up for Grabs 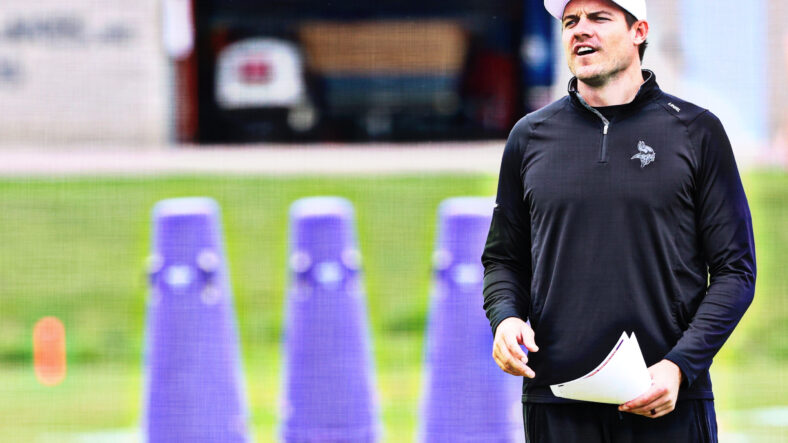 If you have GARRETT BRADBURY written in ink on your Minnesota Vikings depth chart, be prepared to do some scribbling.

The Vikings embark on the 2022 season in three months with a new general manager and head coach, presumably with Bradbury, who enters his fourth season, as the starting center. But that conclusion is not forgone. As Vikings mandatory minicamp heats up, Bradbury is merely a front-running contender for center, not the anointed starter.

Bradbury is an odd gridiron creature, excelling in run-blocking for halfbacks like Dalvin Cook and Alexander Mattison. Yet, his pass protection for Kirk Cousins is worrisome — and has been for three seasons. And when a franchise uses 1st-Round draft capital on a center, the draftee should be a seemingly guaranteed Pro Bowler. Bradbury is not a seemingly guaranteed Pro Bowler. Otherwise, teams can use the later rounds of the draft to discover a starting center.

New general manager Kwesi Adofo-Mensah did not draft a replacement center in the 2022 NFL Draft, nor did he sign an upper-echelon free-agent center like JC Tretter from the Cleveland Browns. Had those measures been taken, Bradbury would be on the proverbial hotseat, especially because the Vikings decided not to pounce on Bradbury’s fifth-year rookie contract option. With no bonafide “new guy” to force Bradbury off the depth chart, most believed the center gig is Bradbury’s to lose — and it probably is.

Still, at mandatory minicamp this week, the openness of the job is more apparent than before. Chris Tomasson from the Pioneer Press reported a handful of players are taking snaps at center, not just Bradbury.

Reed, Davis, and Schlottman — all new free agents — possibly competing for center checks out. Otherwise, Minnesota would have a humongous battle at right guard, a position that should be theoretically filled by LSU rookie Ed Ingram. Indeed, the RG spot has caused heartburn for four consecutive seasons, but the Vikings don’t need four men to start at RG in September.

Ergo, the mass addition of competent linemen appears to be an assemblage for center competition, too. And that was not well known from March through May.

Moreover, Vikings new offensive line coach Chris Kuper described the situation aptly this week, “They’re all pushing each other. Garrett’s taken every rep with the ones. He’s been doing a great job. Those things get sorted out when we get pads on — in camp.”

Bradbury can be considered the likely incumbent to start at center, but he is not a clever tregetour who will convince the rebranded coaching staff to start him no matter what. Reed, Davis, and Schlottman are suitors for the job and provide a “quick hook” option if Bradbury is up to his old tricks via pass protection.

Of course, the utopian scenario is for Bradbury to be “unlocked” by a non-Zimmer, offense-first coaching staff. But the contingency plans are available if that’s a pipe dream. They’ve already been identified.