The 2022 Vikings, According to All National Power Rankings: Week 12 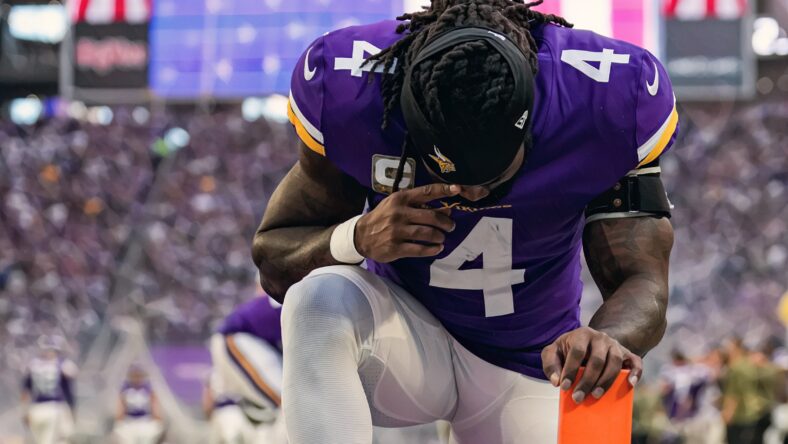 The Dallas Cowboys horsewhipped the Vikings in Week 11, 40-3, a loss than sent onlookers to question the Vikings legitimacy. Against Dallas, nothing went right, and Minnesota must bounce back versus a team led by Bill Belichick on Thanksgiving night.

Minnesota now has around 11:1 odds of winning the Super Bowl in 2022. Last week, those odds were the same, unchanged after the debacle versus Dallas.

Per EPA/Play, the Vikings own the NFL’s 18th-best offense and 15th-best defense after Week 11. Those certainly aren’t the metrics a Super Bowl-contending team produces, but the Vikings have seven weeks to improve.

These are the Vikings weekly power rankings heading into Week 12.

The national average of these totals is 7.6. The world believes the Vikings are about the NFL’s seventh or eighth-best team. Last week, Minnesota was around third.

Nate Davis from USA Today opined on the Week 12 Vikings ranking, “Are they the worst 8-2 team in history? Maybe that’s going too far, but Minnesota is the first to start that well while being outscored overall. The Vikes’ league-high streak of 92 games with a TD also ended while they were being pillaged 40-3 by Dallas. And QB Kirk Cousins came up small in another big game.”

Vinnie Iyer from Sporting News added, “What was that? The Vikings’ defensive issues finally caught up to them against a well-oiled Dallas attack and they couldn’t run or pass their way out of it with another improbable comeback. Their march toward an easy NFC North title will need to be put on hold a little ahead of facing the Patriots at home.”

The Vikings are three-point favorites to beat the New England Patriots at U.S. Bank Stadium in Week 12. The Patriots have defeated the Vikings five consecutive times. Minnesota last toppled New England in 2000 — before the Tom Brady era.