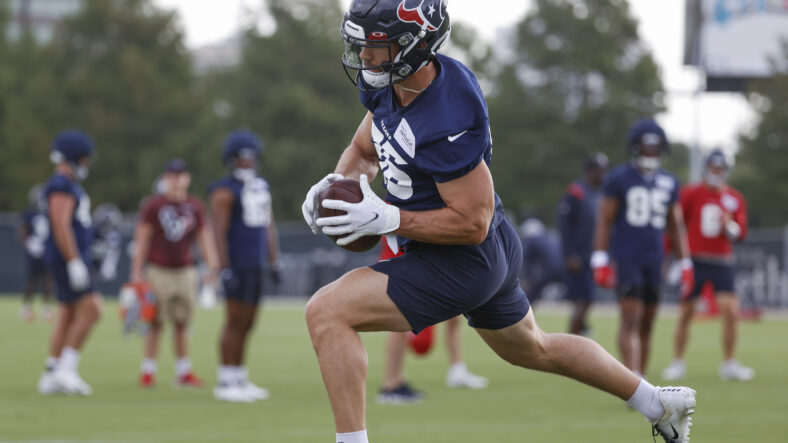 Undrafted rookie Chad Beebe signed with the Vikings in 2018. He was a member of the purple team until this offseason, when his contract was up. The Texans signed the free agent, but the former Vikings receiver didn’t survive today’s wave of cuts.

Chad Beebe participated at the rookie minicamp in 2018 and was signed to a contract afterward. On the final cut day, he didn’t make the team but was retained on the Vikings’ practice squad, where he stayed until Stefon Diggs got hurt and missed some time in 2018. Beebe saw his first NFL action during that time. He had three receptions for 21 yards in a win against the Lions and finished his rookie campaign with a total of four catches for 39 yards. Three of those catches resulted in first downs. He always seemed to catch the ball on important downs.

In his second year, he missed almost the full season due to torn ligaments in his ankle. He appeared in three games and caught two passes for 70 yards. One of the passes was a 61-yard catch, and both receptions were for a first down. In addition to his performance on offense, Beebe returned punts. Fans mostly remember him for muffing punts.

Beebe was finally healthy in 2020 and had an up-and-down season. He recorded 20 catches for 201 yards and two touchdowns. Especially his game against the Panthers is a memorable one. Just a few minutes before the end of the game, Beebe muffed a punt. The game was almost over at that point, as the Vikings were already down, and the Panthers had the ball in field goal range. However, after the defense managed to keep the game in range, the offense took the field, and Beebe’s big moment arrived. The receiver caught the game-winning touchdown and totally redeemed himself within a few minutes. It was the first score of his career.

After the season, his contract was up, and the Vikings didn’t tender their restricted free agent. He became unrestricted. However, the organization brought him back on a one-year contract. On August 31st, the team waived him with an injury designation. That means he was placed on injured reserve after no other team claimed him off waivers. Sadly, his season was over before it even began.

Beebe was a reliable but not very explosive option when he was healthy, but his health was always a big question mark. In three of his four seasons as a Viking, he missed time because of injuries.

Now that the former Vikings receiver is a free agent once again, he can try to land on a different roster and make enough noise to stick around on a 53-man roster. He didn´t catch a pass on offense in the Texans’ first preseason game, but he returned a punt and a kickoff.

The Vikings and all NFL teams will have to cut five players on Tuesday. One week later, all teams have to get down to 80 players on the team, so another five players have to be cut. On August 30th, all NFL rosters need to get the number of players down to 53.