Saints Could Be without Top Weapon against Vikings in London 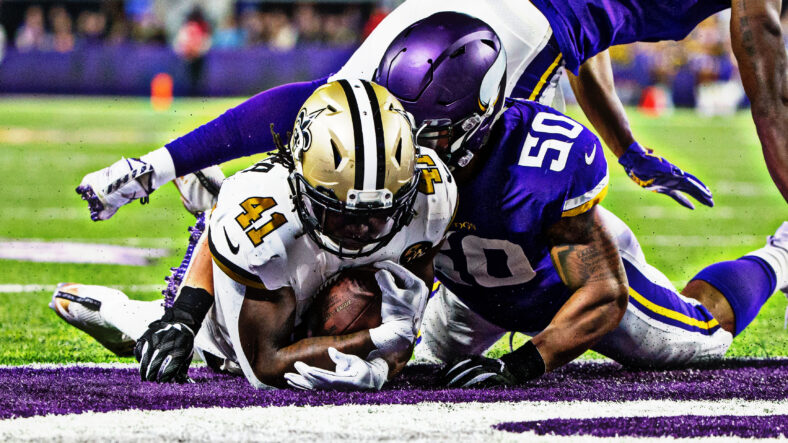 The Minnesota Vikings and New Orleans Saints will continue their rivalry in London on October 2nd. The Week 4 matchup features two of London’s undefeated teams as the Vikings and Saints are a combined 4-0 in England games.

And the Saints are likely to be without their top offensive weapon, Alvin Kamara.

Kamara reportedly threw punches in a Vegas scuffle back in February and was charged with battery resulting in substantial bodily harm.

If the reports of his incoming suspension are correct, Kamara will miss the date with the Vikings, which is noteworthy because the halfback accounted for six touchdowns the last time the teams played. It was a Christmas day showdown, and New Orleans crushed Minnesota 52-33 at Caesar’s Superdome. The Saints notched seven rushing touchdowns, and Kamara was responsible for six.

In his stead, the Saints would lean on veteran Mark Ingram, who is listed as the team’s RB2. New Orleans also has Tony Jones Jr. on the roster, an undrafted free agent from the 2020 class. Jones Jr. touched the ball 59 times last year in the Saints offense.

Regardless of Kamara’s fate, the Saints will play without Sean Payton as the head coach for the first time in 16 years. Payton retired this offseason, although his departure from the sport could be brief as the Vikings rival bides time for a 2023 head coaching job.

The Saints and Vikings are bedfellows for 2022 forecast. Both teams have around +4000 odds to win the Super Bowl next February, positioning themselves around the 20th most likely organizations to hoist a Lombardi trophy. The New England Patriots are hovering around the +4000 Super Bowl odds, as well.

Since Kamara entered the league in 2017, he ranks second in the business for yards from scrimmage, trailing only Ezekiel Elliott of the Dallas Cowboys. When healthy — and not suspended — Kamara averages 102.7 yards per game, so his absence against the Vikings in London would be significant.

Tickets to Vikings-Saints across the pond go on sale in July.