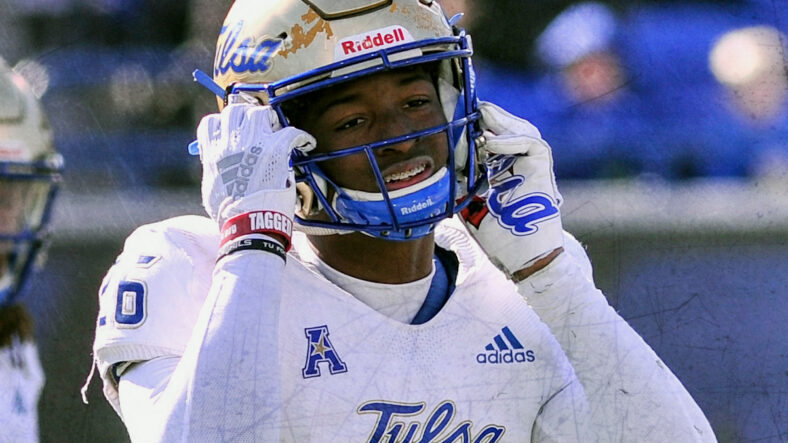 Minnesota Vikings cornerback Akayleb Evans became the eighth rookie from the team’s 2022 draft class to sign his contract, and the 23-year-old is evidently a student of Vikings history.

Two Vikings rookies, Andrew Booth and Ed Ingram, have not yet signed their rookie contracts.

But Evans did, and his Vikings-related opinions are already quite impressive. Evans is vocal on social media and took to Twitter this week to share a couple of his Vikings viewpoints.

First, Pro Football Network tweeted a picture to fans of the Vikings logo and asked “which player comes to mind” when seeing the logo. For Evans, that was Adrian Peterson, who played for Minnesota from 2007 to 2016.

Peterson was a Vikings stalwart for 10 seasons, almost singlehandedly keeping the franchise afloat during some dark stretches. He’s still a part of the NFL at age 37, but retirement could be formally announced at any minute. Peterson is the NFL’s fifth-leading rusher of all time, needing 352 yards to pass Barry Sanders for fourth place.

But Evans didn’t stop there.

The Missouri alumnus opined on a similarly-themed tweet, this time with PFN asking fans who they think of when seeing the Green Bay Packers logo. Spoken like a true Vikings fan, Evans retweeted the post with a picture of Randy Moss faux-mooning Packers fans in 2005.

Minnesota knocked off Green Bay in the 2004 playoffs after the Vikings finished 8-8 in the regular season. The Vikings were six-point underdogs but still spanked the Packers at their house 31-17 on January 9, 2005. Moss caught a game-changing touchdown pass and pretended to show his buttocks to fans, a tease to Green Bay faithful as Packers fans often mooned opposing players as they departed the stadium via bus.

Evans grew up in Texas, so it is unclear if he was a Vikings fan as a youngster. Peterson is from Texas, too, and there may be a connection there for fandom.

Evans will compete for a job at Vikings training camp in less than a month. Minnesota already employs Patrick Peterson, Cameron Dantzler, Andrew Booth, and Chandon Sullivan at cornerback. Still, Evans will look to steal some defensive snaps away from those men in his rookie season. New general manager Kwesi Adofo-Mensah traded a 2022 5th-Round pick and 2023 4th-Rounder for the pick that landed Evans back in April.

Vikings fans learned more about Evans when Adofo-Mensah explained he scouted the corner late at night. Adofo-Mensah said, “Evans was a guy I remember watching at night. I’d sometimes watch him in the dark, and you’re looking at his size…”

Evans is the seventh player in Vikings history drafted from the University of Missouri. Other notables include Kentrell Brothers and C.J. Mosely.