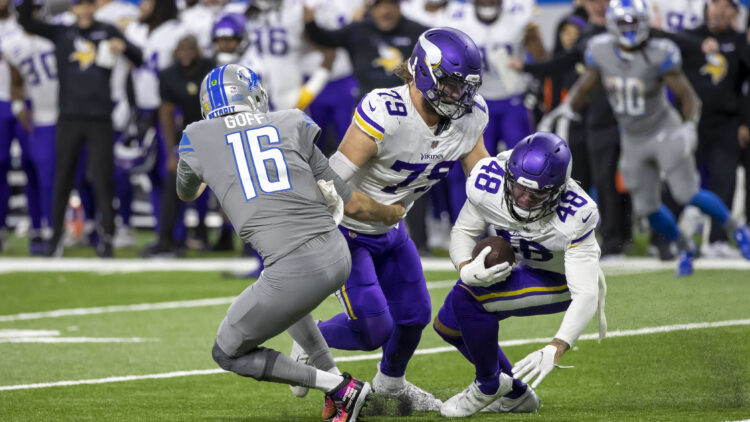 VikingsTerritory‘s Purple Rumor Mill is a two-day chronicle each week. All the week’s rumors are lassoed and plopped in two spots — articles on Saturday and Sunday — for review. Today is the May 1st edition.

Rumor: The Vikings trade with the Detroit Lions was a bad idea.

That sentiment came from Jason Fitzgerald, among others, of OverTheCap.com.

The Vikings should’ve dictated the terms of the deal as a seller. In past drafts, other teams fetched more with premium picks (like the Vikings 12th overall capital). Adofo-Mensah could’ve abused the Lions — if this draft was akin to other years.

Alas, he did not, and now the world must wait to see how the players‘ performance flushes out to determine “who won the trade.” And that will take years.

Muse did what great entertainers do — that’s what this business is all about, after all, entertainment— and jumped into a pool upon learning his draft fate with the Vikings.

This put a notable, comical feat with the name and face — and boom — you know who he is.

Seventh-rounders rarely blossom into much. They’re lottery scratch-offs. But, hey, all he must do is beat out Johnny Mundt for the TE2 job, which is actually fairly feasible.

Rumor: Ed Ingram was a bad investment because of past sexual misconduct allegations.

Ingram was accused of sexual misconduct in 2018, stemming from incidents as a 16-year-old. He could not play for LSU accordingly for a season. Then, the charges were dropped. He was reinstated.

Anything related to him — from here on out — is dicey because it’s a who do you believe situation.

The Vikings claimed they did the diligence on his past and felt safe adding him to the roster. For Ingram, the allegations are in the past, but for the Vikings fanbase, they are brand new.

It’s up to you to decide if he’s nefarious. Maybe. Maybe not.

As for a bad investment, that is in the eye of the beholder. And any determination is fair.