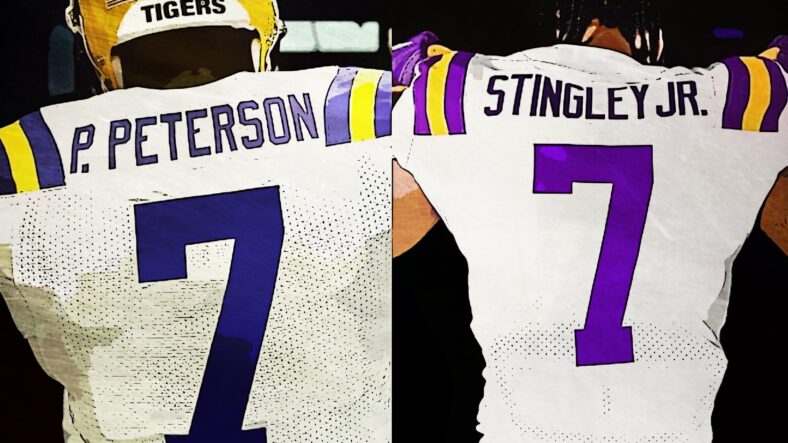 Peterson and Stingley both attended LSU, some ten years apart.

Fast forward a week, and Peterson cooled on the idea, not because he soured on Stingley Jr. — but for the reason he now believes Stingley won’t be available with the 12th overall pick.

Stingley Jr. conducted a marvelous Pro Day on Wednesday, silencing any doubters concerned about his Lisfranc injury or anything, really, about this draft candidacy. As of early April, with Stingley Jr. fully healthy, he and Ahmad Garnder are considered 1. and 1A. for cornerbacks in this year’s draft.

Peterson realizes it, tapering his once-excited expectations of mentoring the fellow LSU alumnus. On Peterson’s podcast, All Things Covered, this week, he said about Stingley Jr.’s draft projection:

“It’s not really taking a gamble ’cause he went out there showed that he can move. All of those concerns should be out the window. I do expect him to be the first corner taken. I don’t see him surviving at No. 12. That would be great if he is, but I don’t see Derek going past 10 honestly.”

While Garnder is theorized as the top corner off the board — perhaps within the Top 5 picks — Stingley Jr. won’t be too far off that placement, if teams don’t reach for quarterbacks and wide receivers. Several of the teams in front of Minnesota are in dire need of quarterbacks and wide receivers, creating a plausible scenario where the Vikings gain the spoils of teams drafting offensive firepower foremost.

For now, that’s the only method for Stingley Jr. to join the Vikings, at least according to pre-draft hype surrounding the player.

Minnesota needs a dominant, dependable corner, not necessarily in 2022 but for long-term planning purposes. Peterson, 31, announced he’d play three more seasons — unclear if that’s all in Minnesota — and Cameron Dantzler is the last man standing for decent young cornerbacks. In that regard, the Vikings must draft a CB in the 1st or 2nd Round to be prepared for life after Peterson.

The reality, though, per Peterson’s reclination to fate is Stingley Jr. probably won’t be the candidate.