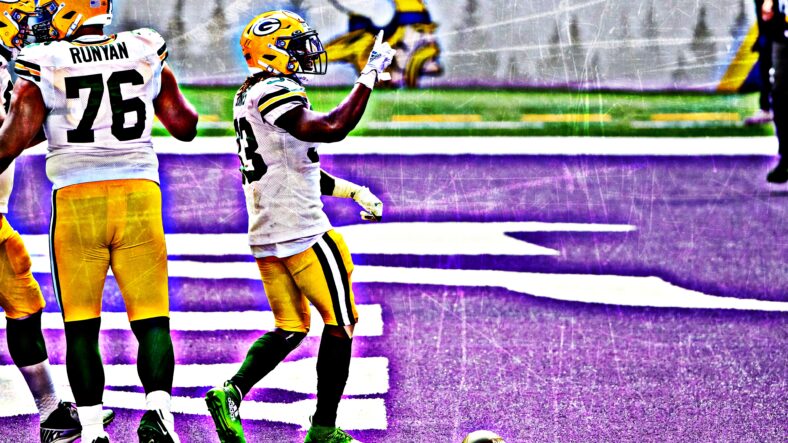 Green Bay Packers running back Aaron Jones opined his thoughts on team-building Friday, mocking the Minnesota Vikings, too, in a video posted to social media.

Jones said, “I know as a Vikings fan you don’t get to celebrate a lot,” in championing the team aspect of sports rather than player notoriety.

Jones entered the NFL on the same weekend as Vikings halfback Dalvin Cook. He was drafted in the 5th Round from UTEP in 2017, performing wonderfully in Green Bay ever since. In the last five seasons, Jones ranks 17th in the NFL for yards from scrimmage and seventh in touchdowns.

Strangely, despite Jones’ criticism about Vikings fans having little to celebrate, the Packers are 4-5-1 (.450) against the Vikings since Jones joined the team.

The Jones video arrived on the backdrop of two Packers free agents electing to join the Vikings in the last week. On Tuesday, EDGE rusher Za’Darius Smith signed with the Vikings. Then on Friday, cornerback Chandon Sullivan followed suit.

In fact, those defections are likely what prompted the video.

Green Bay also lost Jones’ running mate Davante Adams, who was traded to the Las Vegas Raiders on March 18. In Sin City, Adams reunites with his college quarterback Derek Carr and secures status as the highest-paid wide receiver on the planet.

Aaron Rodgers, though, will return in 2022 — as the NFL’s richest player per average annual salary. Annually, Rodgers will earn $50.2 million per season, tops over Deshaun Watson ($46 million) and Patrick Mahomes ($45 million),

Jones is correct on team winningness on the whole. Since 1966, the Vikings rank fifth in the NFL via win percentage (.557), whereas the Packers check in at sixth (.554). But Green Bay has won four Super Bowls while Minnesota has zero such victories.