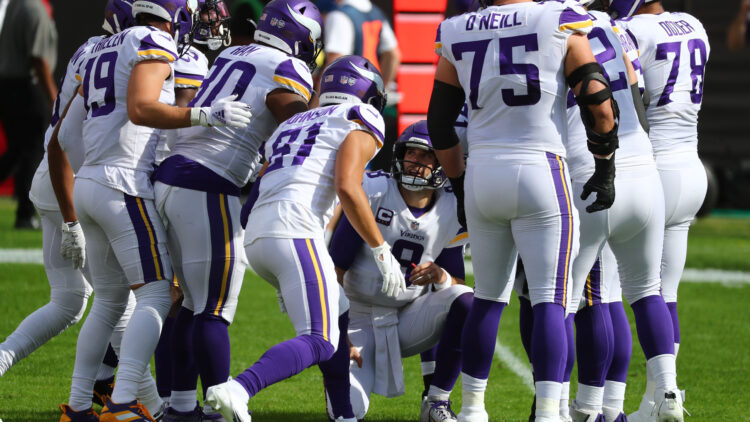 Now, it’s time for a bit of fun as I look at some outside-the-box Kirk Cousins trade destinations. Yes, this is what a man like me views as a fun time!. Once again, I’ve picked four teams that theoretically might have an interest in trading for Kirk Cousins. Of the 12 teams I’ve picked out over the three posts, I view these four as the least likely, but you never know.

Tom Brady announced his retirement at the beginning of February after two seasons in Tampa Bay that produced his seventh super bowl win, followed by a playoff run to the divisional round.

Replacing the greatest ever to do it will not be easy, but that is only the beginning of the Buccaneers problems. They have several key players hitting free agency and dinky cap space to get them resigned — plus finding a quarterback. Of course, teams often find a way, but Chris Godwin, Ryan Jensen, Leonard Fournette, Jason Pierre-Paul, William Gholston, and Ndamukong Suh need to be brought back or replaced.

The defense was one of Tampa Bays’ strengths the last couple of seasons and should still be strong in 2022. They will still have Mike Evans and at least some other capable playmakers. Someone like Kirk Cousins could go into that team and do well, but I just don’t see them in the market for Cousins due to his contract.

Unless Cousins would be willing to sign a much more team-friendly deal, the Bucs have cheaper options. I can see them bringing in Jimmy Garoppolo and making sure they bolster that defense to keep it one of the best in the league.

Only a year after trading a third and this year’s first-round pick for quarterback Carson Wentz, the Indianapolis Colts could be in the market again after missing out on the playoffs with a 9-8 record. What made it worse was that they only needed to win one of their last two games to secure a playoff spot.

They lost to the Raiders and the Jaguars with an inexplicably bad performance. Wentz threw for just 185 yards and gave up two turnovers. He threw for more than 200 yards just twice in the last eight games.

After narrowly losing to Buffalo in the wild card round last year, the move for Wentz was supposed to push them to be genuine contenders. Instead, he brought inconsistency, and no one involved with the Colts has been willing to commit to Wentz being the quarterback next season.

If they can find a trade partner for Wentz, they are candidates to make a big splash at quarterback, with plenty of cap space available. They may try for Aaron Rodgers or Russell Wilson. Should they not be available, they may consider Kirk Cousins.

There was probably more chance of Cousins moving to the big apple before Brian Daboll was appointed head coach. Patience seemed to be wearing thin with Daniel Jones after three seasons as the Giants starter. He has shown flashes of what he can do, but the consistency has never been there while never completing a full slate of games in a season.

The Giants looked primed to move on, and after not being competitive for so long. Kirk Cousins could have been a guy to give them a chance in the NFC East. However, their cap situation would have made it difficult.

Now with Daboll in town, the man who helped turn Josh Allen into a superstar, it is worth giving Jones another year. It’s easy to forget that Allen came into the league an unfancied prospect without huge expectations. Then, he didn’t look special in his first year, before a much-improved second year — followed by taking the league by storm in Year 3.

Josh Allen is talented, but the Bills also found a way to get the best out of him. Daniel Jones is a similar quarterback, so it must be worth allowing Daboll to attempt to unlock him. Unless Daboll looks at him and decides early on that Jones doesn’t have “it,” a move for someone else now looks unlikely.

How about a Kirk Cousins trade to a division rival? Well, sort of. It was another uncompetitive season for the Lions who only managed three wins. They played lots of games tough, and we’re no pushovers, but they were always challenging for the number one draft pick rather than the playoffs — finishing at the bottom of the NFC North for the fourth straight season. I think the Lions have some good pieces in place and with the draft capital from the Matthew Stafford trade. They can build a competitive roster.

A major issue? Quarterback — at some point, they will look to draft one.  I expect them to continue what they did last year and build in the trenches first without a “generational” prospect at quarterback. The strength of this year’s draft is the trenches on both sides of the ball. I expect they will go there again, a strategy I like.

Kirk Cousins would win them more games than Jared Goff in the meantime, but with the Stafford trade, they inherited the ludicrous contract the Rams gave Goff. There’s no easy way out of that this year with almost all of his $31 million guaranteed. It would make sense for the Lions to ride out the season with Goff as they keep building those trenches and ideally find a wide receiver. Then look for a quarterback next year.