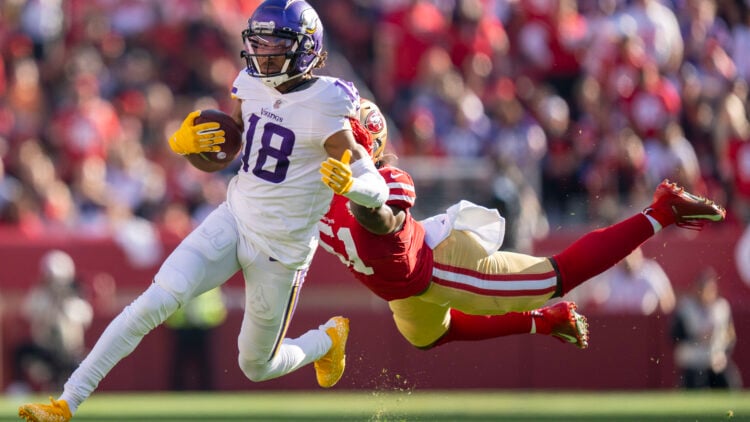 Over the past two seasons, Jefferson has a 93.0 PFF score (an elite number) when a corner tries to press him at the line of scrimmage:

No receiver has been better against press coverage than the Minnesota Vikings’ Justin Jefferson, who boasts the highest PFF grade and has caught 72 of the 109 targets thrown his way against press coverage since entering the league. That’s notable in part because prospective teams weren’t sure if Jefferson could thrive on the outside, leading him to be the fifth wideout drafted in 2020. He was coming off a college season in which he dominated from the slot, but how a receiver fares on the outside against press coverage is what largely determines their NFL ceiling and whether they can be that No. 1 threat in an offense.

Keep in mind that the two years of data comes from Jefferson’s rookie and sophomore seasons. Other players have had the benefit of years of NFL coaching and film study. Even still, Justin Jefferson has proven to be better than all rivals when it comes to dismantling press coverage.

Another interesting tidbit is that Adam Thielen also shows up in the piece. When they consider who produces the most TDs against press, it’s the veteran WR2 who tops the list:

Minnesota has no excuse. Their offense needs to be dominant. The talent at the skill positions is perhaps the best in the NFL. The offensive line – far from dominant – ought to be better. Kevin O’Connell is now the head coach, and his system is supposed to make things easy for the players. All of this needs to add up to a very, very dangerous group.

Thankfully, the Vikings have two receivers capable of being dominant against press coverage: Justin Jefferson and Adam Thielen. They’ll be responsible with leading the charge during the 2022 season.