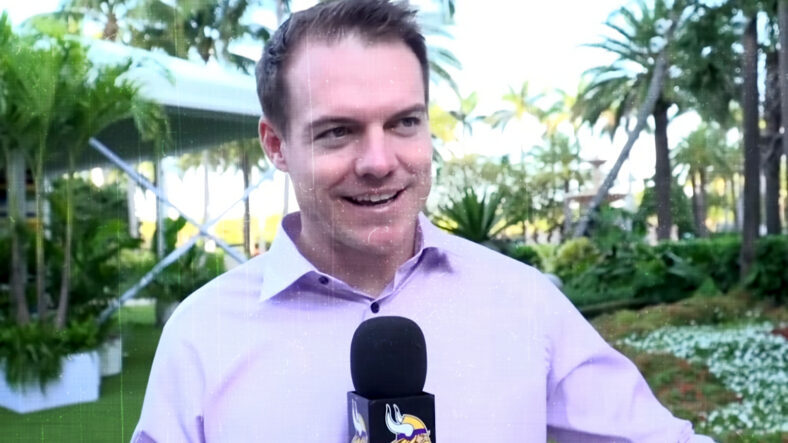 The Kevin O’Connell and Kwesi Adofo-Mensah honeymoon is still very much in effect for Minnesota Vikings fans as the franchise ended 16 years of Rick Spielman and eight years of Mike Zimmer in January.

But not everyone is convinced O’Connell and his coaching staff will jell with the Vikings. One such NFL analyst is Matthew Freedman, Director of Content for FantasyPros and BettingPros, and he pumped the brakes on O’Connell hope in a minor way on Friday.

Freedman tweeted, “In his one season as a coordinator without Sean McVay, Kevin O’Connell oversaw the offense that scored the fewest points in the NFL. The 2022 Vikings offense could be good, but we shouldn’t assume O’Connell is the next McVay just because he worked for him for 2 years.”

The season mentioned by Freedman was the 2019 campaign. O’Connell was the offensive coordinator for the Washington Commanders. He had an assortment of starting quarterbacks, ranging from Dwayne Haskins to Case Keenum and Colt McCoy. All three were awful compared to the rest of the league’s quarterbacks in 2019.

In that vein, Freedman is correct — the Commanders offense stunk with O’Connell in control. His weapons included the aforementioned three quarterbacks, who all struggled, along with a 34-year-old Adrian Peterson at running back and rookie Terry McLaurin as WR1, who tallied 919 receiving yards. The rest of the receiving corps was pathetic.

So, either O’Connell was terrible as a first-year offensive coordinator, or the personnel around him was unbecoming of the NFL norm — or both.

Thankfully for O’Connell’s sake, he ventured to the Los Angeles Rams, linked with McVay, won a Super Bowl, and the rest is history. The Vikings hired O’Connell because of his success with the Rams and ties to quarterback Kirk Cousins in 2017 when O’Connell was Cousins’ quarterback coach in Washington.

Overall, there is no wrong answer here. Freedman wants to see games play out before anointing O’Connell with a McVayian title. Vikings fans refuse to believe O’Connell’s success in Los Angeles solely derived from McVay’s coattails.

But let’s be clear about his one stint as offensive coordinator in Washington — no coach is going to extrapolate greatness from Haskins-Keenum-McCoy with a side dish of elderly Adrian Peterson, plus Terry McLaurin and his WR pals Kelvin Harmon, Paul Richardson, and Trey Quinn.

The Vikings 2021 offense ranked first leaguewide in 15+ yard gains while committing the fewest turnovers. O’Connell does have some building blocks to use. It also doesn’t hurt to employ Justin Jefferson, Dalvin Cook, Adam Thielen, and Kirk Cousins instead of the statistically bottom-feeding group from the 2019 Commanders.