New Power Ranking Suggests the Vikings Are “Stuck in Limbo”

Opinions about the 2022 version of the Minnesota Vikings have been a mixed bag at the national level, to say the least. On one hand, you have personalities like Colin Cowherd anointing the Vikings as a contender and this year’s champs of the NFC North. Then, there are others that have been unimpressed with the first offseason of Kwesi Adofo-Mensah and Kevin O’Connell. The latest power rankings from Pro Football Focus land more on the latter side.

The list is put together by Sam Monson and puts each team into five separate tiers:

If you read the title, you can guess where the Minnesota Vikings landed on this list. Yes, interestingly the Vikings couldn’t even find themselves among the group of teams that are said to have their eyes on the playoffs despite all their offseason moves that suggest this as the goal.

Instead, Monson sees the Vikings as a team stuck in a period of mediocrity even with the new head coach and GM combo, and he has put them as the No. 22 team in the NFL on the first day of August. The Vikings find themselves sandwiched between the Pittsburgh Steelers and Washington Commanders. Here is the rationale behind this ranking:

“The Vikings have won between seven and 10 games for the last four seasons, prompting ownership to make a change and hire a new general manager and head coach. The moves this offseason have been all about maintaining course though, which leaves the team stuck in the same narrow band of outcomes as before. Unless Kevin O’Connell does a fantastic job as head coach in Year 1 or Kirk Cousins has an equally inspired season at quarterback, this team likely wins between seven and 10 games again.”

Obviously, much of this ranking revolves around a belief that Kirk Cousins gravitates towards .500 football. Those of you that heavily weigh his 59-59-2 regular season record will probably agree with this notion. Then there are those that scoff at the idea of “QB wins” being a stat that will despise this ranking.

There is validity to both sides. There’s a chance that it takes Kevin O’Connell a few weeks, or perhaps even his first full season, to figure out how he wants to run his football team. Injuries are a concern for the veterans on the Vikings defense as well. However, the possibility remains that Minnesota’s offense could get even better under O’Connell. Justin Jefferson seems to have extremely have expectations for this season, at least. On the other side of the ball, Danielle Hunter’s hopes are similarly high.

There is a ton of volatility for how this Vikings season could go. If all goes correctly, Minnesota should find themselves in the hunt for an NFC title. If the injury bug bites them again and the offense doesn’t improve, we could be in for another year of .500 football. There are 41 days until we get to find out which direction this team will go in this year. 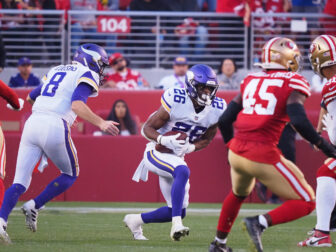