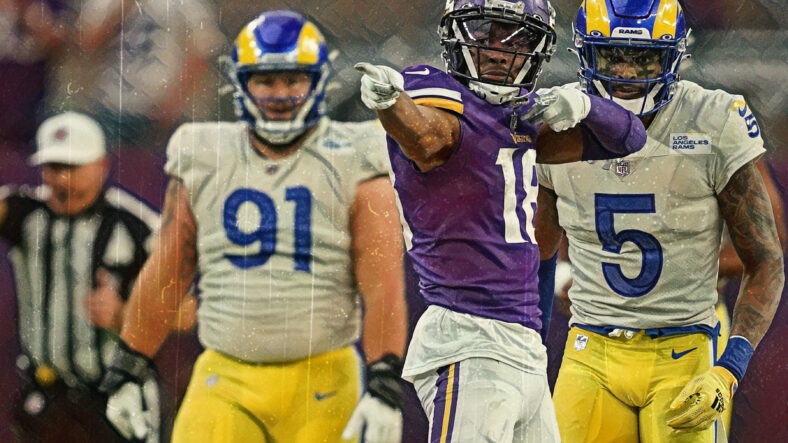 The 2022 Minnesota Vikings want a little piece of what the 2021 Los Angeles Rams pulled off.

The Vikings finished 8-9 in 2021, the Rams won the Super Bowl over the Cincinnati Bengals, Minnesota fired its longtime head coach, and Los Angeles’ offensive coordinator joined the Vikings.

That’s Kevin O’Connell, who becomes the second-youngest coach in the NFL behind his former boss, Sean McVay. With the Vikings, O’Connell will formally end the “run-first” and “defense-first” machination of Vikings football, instead throwing the ball more often and “getting with the times” by focusing more on the offensive side of football.

In doing so, beneficiaries will emerge. Wide receiver Justin Jefferson certainly wasn’t ignored during his first two seasons — he is the most targeted wideout in NFL history through a player’s first two seasons — but Jefferson’s production could spike even more this September. The Rams targeted WR Cooper Kupp like fiends in 2021, tossing the ball in his direction 191 times. And as a baseline, Jefferson envisions a Kupp-like workload upcoming.

Jefferson told The Ringer last week, “Just seeing what Cooper Kupp did last year, that gives me so much hope, gives me so much excitement to see what I can do in the same position that he was. Him being so close to reaching the record, him getting that triple crown, all those things that he accomplished are up in the air for me right now, so we just gotta buy into the system, learn the plays and we all have confidence that KO is going to distribute the ball to different people throughout the offense.”

The Vikings wide receiver also went into more detail about his expectation to be used like Kupp, “Pretty much where Cooper Kupp was at, that’s pretty much where I’m at. My ability to move in different positions is gonna be more. I’m able to go outside. You don’t really see Cooper Kupp lining up outside as many times as I would. Or me lining up in the backfield or lining up at different positions to get the ball.”

Minnesota is no stranger to ultra-productive wide receivers. Throughout franchise history, Randy Moss, Cris Carter, Anthony Carter, Jake Reed, Sammy White, Adam Thielen, Stefon Diggs, Percy Harvin, and others have contributed mightily through the air. But the problem for the Vikings is balance. During many of the eras with monsters-of-rock WRs on the roster — there are several such eras — the defense was a footnote. For example, while Moss was on the team from 1998 to 2004, the Vikings ranked 27th in points allowed — otherwise known as sixth-worst leaguewide.

Jefferson and the rest of the Vikings fanbase aspire to experience a balanced Vikings team while Jefferson racks up the Kupp-like numbers.

For a moment in time during the 2017 season, the Vikings had balance, although the defense was emphatically the superior product. And wouldn’t you know it, the Vikings were about 45 NFL minutes from a home Super Bowl.

Kupp notched 1,947 receiving yards and 16 touchdowns on 145 receptions last season. So, that’s what Jefferson has in mind. In that regard, it’s no wonder the national media is running with “2,000-yard season” talk for Jefferson.