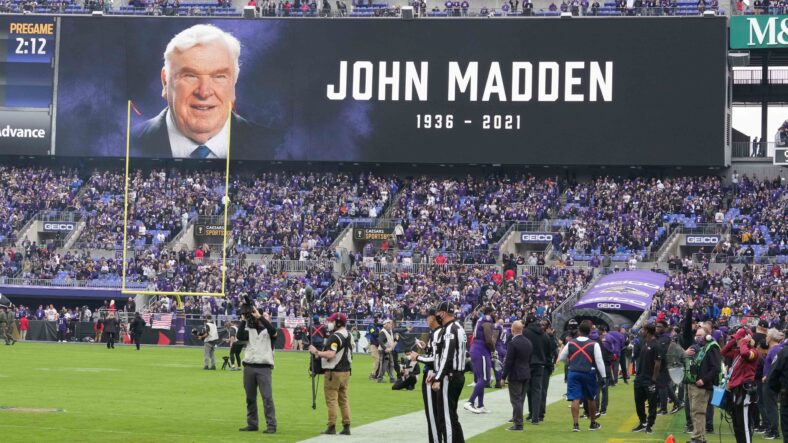 John Madden’s legacy will be forever entrenched in the NFL. As a coach, he led the Oakland Raiders to seven AFC West division championships between 1969 and 1978. 1977 also saw the Raiders go to the Super Bowl and win against the Minnesota Vikings.

Following his retirement as a coach in January of 1979, Madden joined the broadcast booth as a color commentator, working for CBS Sports until 1994, when he transferred to Fox Sports. He also joined the Monday Night coverage on ABC Sports in 2002 and then was a part of the Sunday Night NBC game from 2006 until April of 2009.

But what most video game players will remember the name John Madden for is his tie to an NFL series. With Madden NFL 23 coming out, this game pays tribute to the legacy Madden served throughout his career as a broadcaster and coach.

As usual, there are new aspects of each installment in the Madden series, and Madden 23 is no different.

One new aspect being added to this year’s game is the FieldSENSE Gameplay system. According to ea.com, “The all-new FieldSENSE Gameplay System provides the foundation for consistent, ultra-realistic gameplay, and equips players with more control at all positions in every mode.” Unfortunately, this mechanic is for select versions, so those that may have a PlayStation 5 or an Xbox Series X or Series S console will be able to experience it.

What used to be Connected Career from the 13-19 installments has now turned into Face of the Franchise. And this year’s Face of the Franchise mode puts pressure on the player to succeed, as the EA.com piece notes. “The League drops you into your fifth NFL season at a skill position of your choice (QB, WR, RB, CB, MLB), and you’re seeking a fresh start with a new team. Negotiate a one-year “prove-it” contract with one of 32 NFL teams and show out with great on-field performance to earn rewards and level up . . . The addition of New Drive Goals and Drive Summaries allow you to tweak your experience throughout the game and get feedback and rewards based on how well you play.”

Other modes such as Madden Ultimate Team, The Yard, and Superstar KO are also returning to Madden 23. The game will officially launch to the general public on August 19, 2022.

The late John Madden will have a legacy to remember in the NFL and the video game industry, and Madden NFL 23 is doing what it can to salute its namesake.