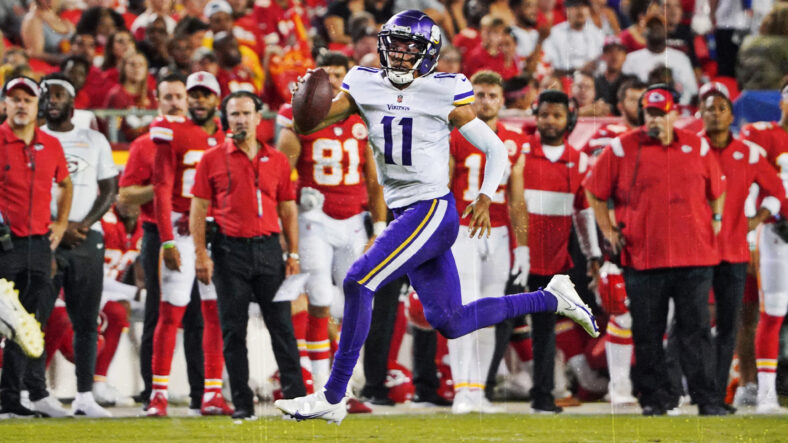 Minnesota Vikings quarterback Kellen Mond won’t be the mysterious figure he was in 2021.

With the introduction of a new coaching staff, Mond earned a clean slate and seems poised to grab the team’s QB2 job. About five months ago, Minnesota’s coaching staff expressly stated that Mond wasn’t quite “the guy” for Kirk Cousins’ immediate backup.

On Tuesday, Vikings new offensive coordinator Wes Phillips was asked by reporters about Mond, and his reply was encouraging for the second-year player.

And 141 days ago, ex-Vikings skipper Mike Zimmer was asked similar questions about the same player and infamously stated he didn’t need to see any more of Mond on a football field as he’d seen enough in practice.

So, Mond either grew up rapidly in five months, or the new coaching regime has different criteria for evaluating young quarterbacks.

Overall, Mond’s progression is a fascinating storyline for Minnesota because he was drafted out of the 3rd Round in 2021. As a 3rd-Rounder, Mond could truly go either way as an eventual starting quarterback or a career reservist player. However, with Zimmer’s coaching staff, Mond appeared to be devolving into irrelevance.

Some onlookers of the Vikings even theorized Mond as a replacement for Cousins, the QB1, at some point. Cousins is old-ish, mostly immobile, and as-advertised in a consistent fashion. Conversely, Mond is young, mobile, a beacon of youthful “what could be” for the Vikings future at quarterback.

The next step? Well, Mond must topple incumbent QB2 Sean Mannion this summer for the backup quarterback job. A 3rd-Round quarterback should reasonably win a QB2 job, especially over Mannion, who is non-dynamic and more immobile than Cousins.

Most outside depth charts still list Mannion as the QB2, but those projections were formulated before this mini-surge of Mond momentum. Last week, head coach Kevin O’Connell also praised Mond, “Kellen’s having a good spring so far, working incredibly hard, digesting the system. He made a couple of checks yesterday at the line of scrimmage that he wasn’t prepared play-by-play for; he just instinctively did it. Those are the little things you look for.”

Couple Phillips’ statement on Tuesday with O’Connell’s words last week, and Mond may actually ascend the Vikings depth chart — like folks believed he would in 2021.